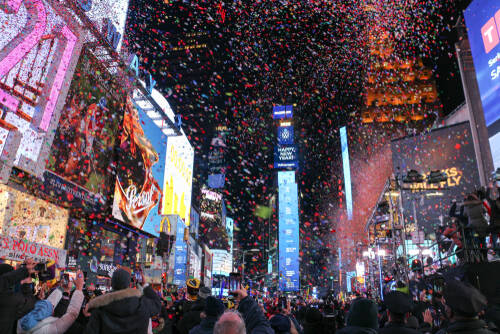 Three police officers in New York City are currently in stable condition after being attacked with a machete by a man near Times Square, according to the police commissioner.

The incident took place at around 10 p.m. on Saturday on West 52nd Street and 8th Avenue, outside a designated security screening area for New Year’s Eve celebrations.

The suspect, who has been identified as a 19-year-old man, approached an officer and tried to hit him on the head with the machete.

He then attacked two other officers before one of them fired their weapon and hit the suspect in the shoulder. The suspect is receiving treatment for their injuries.

Officials from the FBI, NYPD, and Joint Terrorism Task Force held a joint news conference early on New Year’s Day to announce that they are investigating the attack.

The commissioner stated that they believe the attacker to be a sole individual and that there is currently no evidence to suggest otherwise.

One of the officers, who recently graduated from the police academy, suffered a skull fracture and a large cut on their head, while another officer, with 8 years of experience, sustained a cut.

The commissioner did not provide details on the injuries sustained by the third officer. The FBI, working with the task force, is collaborating with the NYPD to determine the nature of the attack and will thoroughly investigate all leads.

The authorities did not provide any information on a potential motive for the attack and stated that the investigation is still in the early stages.

The mayor of New York, Eric Adams, commended the police for their response to the incident, stating that they quickly secured the area and acted with the level of professionalism expected of them.

After helping their fellow officers and apprehending the suspect, the responding officers returned to their duties to continue protecting the city during New Year’s Eve celebrations.