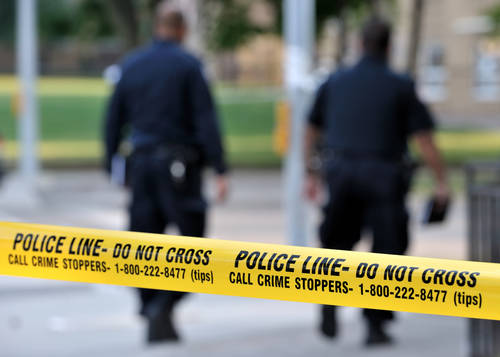 A police officer was shot and killed in the line of duty on Thursday night in Rochester, New York.

A Rochester police officer was fatally shot Thursday evening, and another officer was wounded in a “cowardly ambush.” A female bystander was also injured in the incident.

A Rochester Police officer was shot and killed on the same day that Rochester Mayor Malik Evans declared a “gun violence emergency” because of the rising number of shootings.

The police chief said several law enforcement agencies are helping to investigate the incident. Smith said the police department is continuing to protect the community.

Chief Smith did not share any details about the incident, but said that officers leave home every day not knowing if they will return home.

Rochester Mayor Malik Evans called it a “sad day for our community” and said he was angry that someone had taken an officer’s life. Mayor Evans urged anyone with information on the triple shooting to come forward.

The shooting of two police officers comes as Rochester’s deeply divided City Council wrestles over the future of policing in this community. A slate of reform candidates was elected to office after the 2020 death of Daniel Prude in police custody and the often violent clashes between police and protestors that followed.

For more information on this story, consider the news outlets listed below.