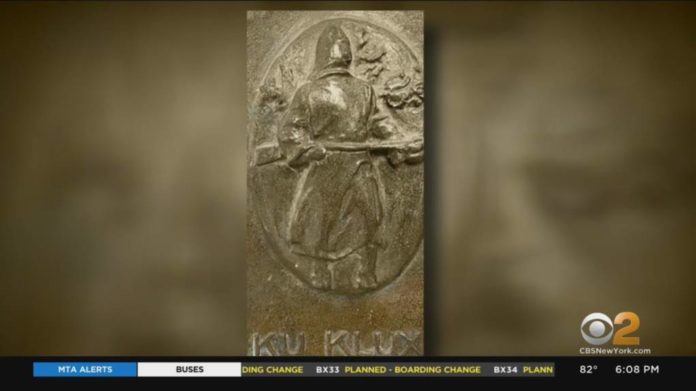 The Congressional Naming Commission said a plaque at West Point, the United States Military Academy, with the name Ku Klux Klan written out and a hooded figure displayed at the entrance to Bartlett Hall, falls outside of its purview.

The commission urged the Secretary of Defense to create a standard disposition requirement for DoD assets that highlight the K.K.K.

The marker that includes the words Ku Klux Klan is part of a larger piece of artwork that appears at the entrance of Barrett Hall, the campus’s Science building. The artwork was dedicated in 1965 to West Point graduates who served in World War II and Korea.

The US Military Academy’s Public Affairs office acknowledged they had received the naming commission’s report and said they are “reviewing the recommendations.”

The renaming of bases with Confederate monikers has been a years-long process. The Trump administration vetoed the legislation, but Congress overrode his veto with overwhelming bipartisan support.

A panel of retired generals and civilians reviewed the West Point campus and made recommendations for changes. The academy is reviewing the recommendations and will work with the Defense Department and the Army to implement them.

Sen. Kirsten Gillibrand, D-N.Y., said she would work with the secretary of defense to ensure that anything that commemorates the Confederacy is removed.

To learn more about this controversial plaque, please consider the news outlets listed below.