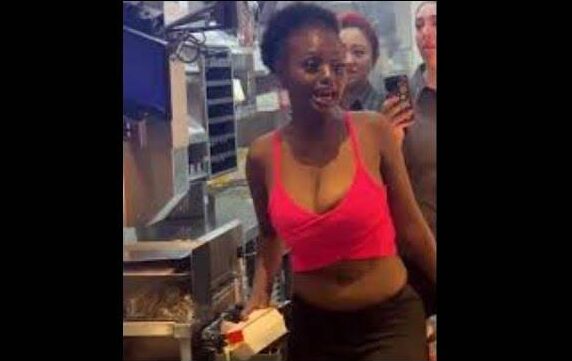 In a viral video posted to TikTok, a woman was seen screaming at McDonald’s employees before jumping over the counter to make herself a burger.

The 19-year-old – who has not been publicly identified – was arrested and charged with disorderly behavior, property damage, and assault last week in Adelaide, Australia.

TikTok footage showed the crop top-clad customer hurling abuse at stunned employees, but the reason for her outburst was unclear.

“I will beat you up or I will leave!” the unruly patron can be heard shouting in the video, which has received over 75,000 views.

Next, she walks into the back kitchen, screams at more staff without making any sense, and then makes herself a burger. Before being detained by two police officers, she took a bottle of water from a refrigerator.
An assault charge was filed after the culprit allegedly threw the water bottle at a patron.

TikTok viewers were shocked by the woman’s audacious behavior, with one person commenting: “It’s really sad that people have to go to work and deal with this kind of stuff.” Another person wrote: “People need to be held accountable for their actions,” and expressed hope that the customer would face the full consequences of the law.

The incident at the fast food franchise has garnered attention on TikTok, but it is not the only such incident to make headlines in recent months.

Another video circulated on Twitter this week shows several women fighting with workers at a Waffle House in Austin, Texas, after becoming upset about slow service.

There was an additional fast food upset that ended the life of an innocent employee that was on the clock. In August, an employee at a McDonald’s in Brooklyn was shot and killed by a customer who allegedly complained about receiving cold fries.