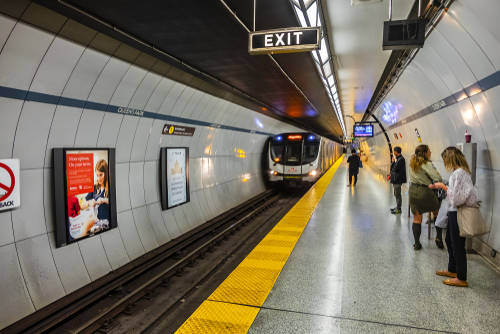 A 33-year-old woman was viciously assaulted by a homeless man in a Queens subway station after ignoring him on a train, police said Monday. The suspect, 41-year-old Waheed Foster, has two prior busts for attacking women.

Police arrested a man in a brutal assault inside a Queens subway station that was caught on surveillance video. The attacker kicked and punched the woman several times before fleeing the scene.

Elizabeth was attacked by a man with a bottle, punched mercilessly and kicked repeatedly, and was dragged across the concourse and slammed headfirst into a wall. She was kicked five times before the suspect calmly walked away into the transit system.

Elizabeth Gomes, 33, says she’s scared and battled ongoing injuries after the attack. Elizabeth Gomes was beaten so badly she stands to lose vision in her right eye. Her husband is heartbroken and furious.

The suspect, 41-year-old Waheed Foster, is now charged with felony assault for stabbing his 21-year-old sister. He was on parole until November 2024 at the time of last week’s attack.

Gomes said there were no police officers anywhere in the station, and she doesn’t understand why they didn’t respond to the attack.

Transit crime has soared more than 43 percent so far this year compared to the same period in 2021, with straphangers more likely to fall victim now than before the pandemic.

For more information on this story, check out the news outlets below.