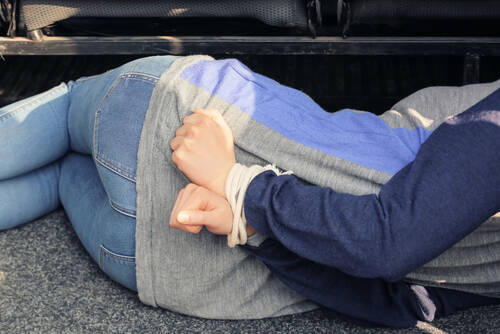 On Sunday, police arrested four people, including a 16-year-old girl, after attempts by jail officers to save a woman abducted outside Stanley Prison failed.

Wong Yu-fai, chief inspector of the Western district, said police received a report at 10:19 am on Saturday that four people had pulled a woman into a car outside Stanley Prison. Two Correctional Services Department officers and some onlookers attempted to stop the suspects, but they fled.

In addition to a teen girl, three men, ages 17 to 37, from the local area were arrested overnight. Their charges include false imprisonment, assault occasioning actual bodily harm, and dangerous driving.

An online video shows the three male suspects suddenly approaching and assaulting the victim before pulling her into the minibus. Throughout the ordeal, the victim cried for help as others tried to intervene.

In the clip, an attacker is seen pushing a prison officer away as he approaches the vehicle to help the victim. Additionally, the footage shows the officer trying to pull one of the attackers from the vehicle but failing. The video ends shortly after another officer arrives on the scene to assist him.

Within 15 minutes of the abduction, officers from the Hong Kong Island Regional headquarters’ emergency and tactical units intercepted the vehicle and rescued the woman. Several members of the public provided information about the suspects, including their appearance, license plate number, and escape route.

Executive Council convenor and former security chief Regina Ip Lau Suk-yee commented on the incident as well. He stated that proactive measures to prevent the kidnapping altogether would have been more effective. It was fortunate that the suspects were intercepted by the authorities, but the situation could have ended very differently if the police were not successful.