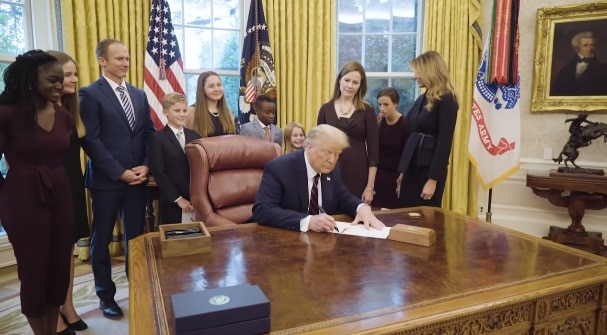 (ConservativeStar.com) – Anybody familiar with the confirmation hearing of Supreme Court Justice Brett Kavanaugh knew that if President Donald Trump got the opportunity for another appointment, the process would be just as bad. Judge Amy Coney Barrett is now sitting in that hot seat, while Democrats, like Senator Kamala Harris (D-CA), lay into her. But she and her family, together, decided to move forward knowing what the Left had in store for them.

Judge Barrett has two major anchors in her life: her faith and family. She’s the mother of seven children, five she gave birth to, and two adopted from Haiti, and one might think the Left would applaud her for her compassion. However, some Liberals are calling her a “white colonizer” for adopting two black children.

Democrats are outmatched in every way by Judge Amy Coney Barrett.

Watch her response to attacks on her family and faith at today's hearing… pic.twitter.com/qHxGJn75Ht

Barrett is being hounded on how she’d rule on cases centered around Liberal issues like Obamacare and abortion. Harris viciously attacked her on the first day of the hearing, accusing her of wanting to rip healthcare away from Americans. The judge has politely rebuffed all of them, even reminding them that Joe Biden’s “Ginsberg rule” and the canon of ethics prohibit that line of questioning.

Considering the makeup of the Senate, Judge Barrett’s confirmation is all but assured. However, if the Democrats win the presidency and retake the Senate, then their threat of a “court-packing” scheme looms large.