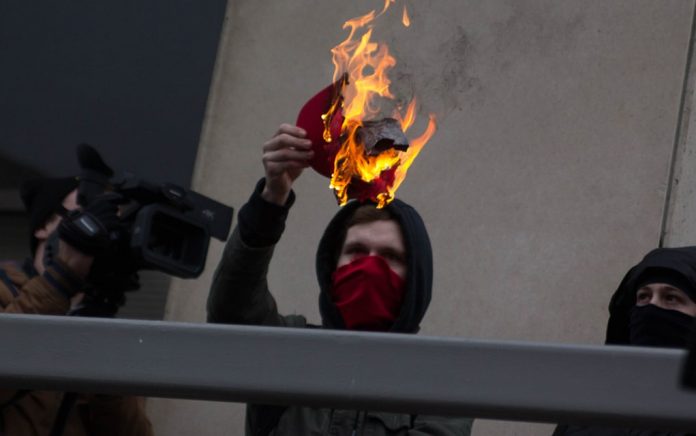 (ConservativeStar.com) – On Sunday, US Attorney General William Barr had a lot to say about the Black Lives Matter (BLM) movement, Antifa, and Democrats. For nearly three weeks, the Department of Justice (DOJ) has been cracking down on the violence as Democratic mayors and governors empowered the rioters and the destruction they left behind. During a Fox News interview, Barr lumped the far-left rioters with the Left, equating them as one and the same.

When George Floyd was killed in Minneapolis in late May during the height of states shutting down to protect against COVID-19, protestors took to the streets to protest police brutality. It didn’t take long for the movement to get hijacked by far-Left groups like Antifa. Demonstrations quickly turned into riots.

In Seattle, one group took over six blocks and declared an independent, autonomous zone from the city and the United States known as CHOP. In Portland, there have been nearly three months of extreme violence every night. New York, Chicago, and Los Angeles have experienced their share of destruction and destroyed lives.

In the wake of the riots, demands emerged to defund the police in Liberal cities across America. Democrats were all too willing to comply. On August 10, the Seattle City Council is expected to vote to defund the police department by 50% and cut the police chief’s salary. Other major cities like LA and New York City are preparing cuts as well.

The attorney general said he was shocked at the attacks on law enforcement officials. He said Liberals are intent on “…tearing down the (law enforcement) system, gaining power at all costs,” and tied the Democrats to BLM.

Then, Barr called out the movement as “… a revolutionary group that is interested in some form of socialism, communism… they are essential Bolsheviks.” He said their tactics were “fascistic” as they use protestors as cover to employ guerrilla warfare.

Additionally, Barr said Liberals have abandoned their traditional views, have a lust for power to design a “utopia” for Americans and Trump got in the way of their agenda. The AG further said the group is part of an organized effort to oust Trump.

History of Black Lives Matter and the Modern Liberal Movement

Barr is not presenting a conspiracy theory. The movement takes its name from “Antifaschistische Aktion,” which was founded in May 1932 by Stalinist leaders of the Communist Party of Germany.

In the United States, Antifa has a long and storied history. It was established in 1933 as the American League Against War and Fascism by the Communist Party USA. In the 1960s, the Pink Panthers arose from the Communist Party USA movement. It was founded by Marxist college students in Oakland, CA as a precursor to today’s movement.

According to the FBI, The Pink Panthers practiced violence and guerilla tactics to overthrow the US government. By the 1980s, they defended neo-Nazi skinheads and incorporated them into the movement. In the late 1990s, Antifa was responsible for trashing Seattle with violent protests during a meeting of the World Trade Organization.

The leaders of BLM have openly admitted they “are trained Marxists.”

Democrats, the Media, BLM, and Antifa are Not Peaceful

The fact that Democrats are aligning themselves with BLM and Antifa is unsurprising. However, Barr didn’t end there. He also said the media isn’t covering what’s going on. They, and Democrats, only want to talk about “peaceful” protests. Barr said that idea is “a lie” and the “American people are being told a lie by the media.” He then said the media and the Democratic Party are one and the same.

The truth is coming out.