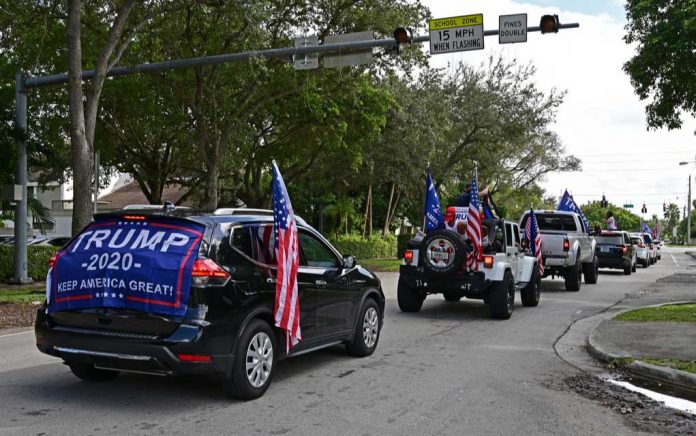 (ConservativeStar.com) – A group of people in Santa Monica, California, were driving down the street showing their support of President Donald Trump’s effort to make sure the Liberals played by the rules in the recent election. According to one of the city’s police sergeants, Santa Maria resident Jacob Garza allegedly circled around the block at high speed and crashed through the parade, overturning another vehicle and injuring two passengers.

One of the rally participants physically restrained Garza in a chokehold until police arrived at the accident scene. In a blatant attempt to turn this around, the assailant has started a GoFundMe page claiming he was attacked simply for being a gay man. No explanation is given as to how anybody could have known that — which has naturally led to anti-Trumpers posting videos of him being restrained and making similar allegations.

Jacob Garza (20) was held down by Trump supporters after he allegedly "Hit a woman and her kids over trump flag" and threw a bottle at them then caused a car wreck in Santa Maria CA pic.twitter.com/eyyg54VFGk

Garza was arrested for the incident and cited for reckless driving causing injury.

It’s unclear if the suspect was intentionally trying to hurt parade-goers. However, many have warned Republicans about the vigilantism that could possibly take place from the Left post-election. Was this an example of what they were warning us about and what’s to come?