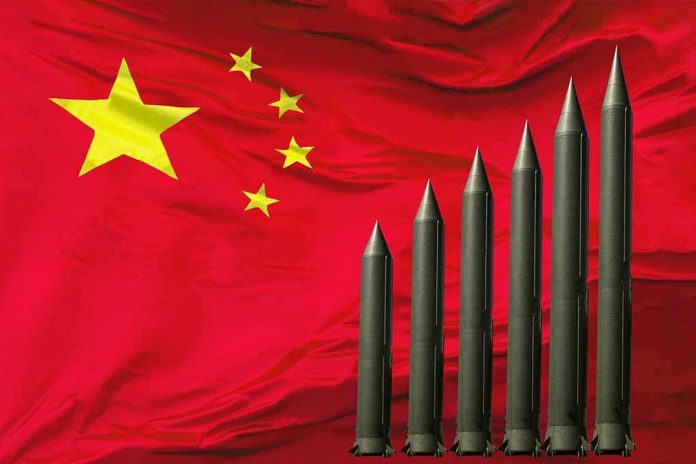 (ConservativeStar.com) – China’s President Xi Jinping, who is also the general secretary of the Chinese Communist Party, has led his country into an era of increasing military aggression in the South China Sea and surrounding areas. It’s precisely because of this that Western intelligence organizations are analyzing an August rocket launch.

Multiple news sources cite a story from The Financial Times reporting that the Beijing government successfully tested a new nuclear-capable hypersonic missile/glide vehicle that could be a game-changer in the balance of military power. Rather than a traditional Intercontinental Ballistic Missile (ICBM), which follows a fairly simple arc from launch point to target, this system reportedly inserts an airframe into low orbit that could then hit the United States with a warhead flying over the South Pole.

The significance here is that America’s early warning system and defensive measures are closer to the North Pole. That trajectory choice could also explain why the test was a surprise to US officials.

China does not dispute the fact that they performed a test launch. However, they claim the missile is not a weapons system but instead is a reusable vehicle for peaceful space travel akin to the now-retired NASA Space Shuttle fleet. According to an article in Global Times — a website closely connected to the Communist government — the technology is solely meant for “peaceful purposes.” Still, some in the West believe that perhaps President Jinping and other officials are keeping their fingers crossed behind their backs when they make that claim.

The promotional Global Times piece goes on to reiterate the peaceful use line. It also accuses Washington of pushing a false narrative as a scare tactic because advanced space technologies developed by countries like China and Russia would mean “the US’ hegemony in using space for non-peaceful purposes will be threatened.”

Also casting doubt on the sincerity of the Chinese party line is an analysis by Wang Zhicheng, one of the country’s experts on aerospace science and technology. It implied China could change these projectiles over to militarized platforms should the need arise.

The Communist leadership in China uses its political influence to impose its “One-China Policy” on the world. The policy maintains that Taiwan is nothing more than a breakaway province and still part of its sovereign territory. In an attempt to prove their point, they fly military airplanes that skim or enter Taiwan’s Air Defense Identification Zone (ADIZ) on a regular basis. Their flights have increased since President Joe Biden took office. During the first week of October, they sent a reported 159 flights into the ADIZ and 256 total since September 1, 2020, according to Reuters.

China has also built man-made islands it has turned into military bases off its eastern coast that could threaten Taiwan, the Philippines, and Australia should hostilities break out. The Communist regime’s push for dominance does not extend only out into the Pacific Ocean. They also look to the west, at Vietnam, as evidenced by the placement of dams on the Mekong River that impact natural resources, and the ramming and sinking of fishing boats in April and June 2020.

While the recently tested rocket system reportedly has a peaceful intent, it’s certainly something worth keeping an eye on.