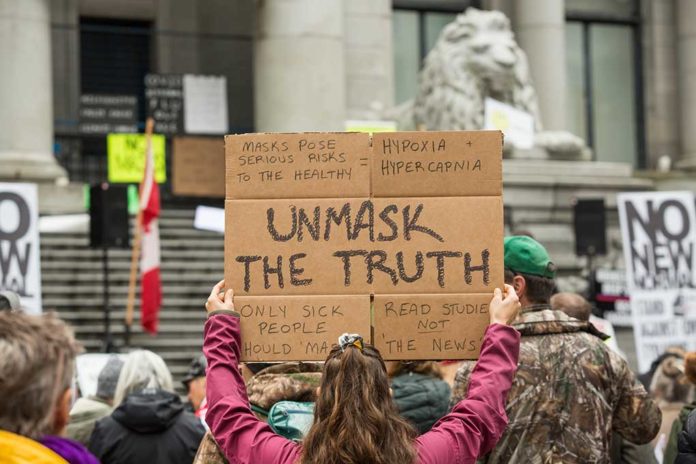 (ConservativeStar.com) – The COVID pandemic might have been bad for our health, but it’s been even worse for our freedoms. That’s the grim conclusion of a new report on the world’s governments. Authoritarian regimes have become more authoritarian, while many democracies have become less democratic.

Every year, the International Institute for Democracy and Electoral Assistance (IDEA), a think tank based in Stockholm, Sweden, releases its Global State of Democracy report. It analyzes how governments around the world are working and grades countries as democratic or authoritarian. It also warns which are “democratically backsliding” – where governments are cutting away at freedoms.

For the first time, the US is on that list.

IDEA says dictatorships and strongmen have used the pandemic as an excuse to tighten their grip even more, singling out Belarus, Cuba, Myanmar, Nicaragua and Venezuela for criticism. Yet more worrying, though, is how many democracies have become less free. The report says, “More countries than ever are suffering from democratic erosion,” with 70% of people worldwide now living in countries that are non-democratic or backsliding. That includes 331 million Americans.

IDEA says there’s been a “visible deterioration” in US democracy over the last year. The problems it identified include last November’s contested presidential election, the violence following the death of George Floyd last summer and “runaway polarization.” However, the problem dominating the report is COVID-19 and how governments have responded to it.

According to the report, 64% of countries have brought in anti-COVID measures the report characterized as “disproportionate, unnecessary or illegal.” The crackdown on “misinformation” is a serious problem, with governments using it as an excuse to restrict freedom of speech – or, in the US, relying on liberal tech companies to do it for them.

The pandemic has also seen Americans forced to wear masks, given a choice between accepting a vaccine or losing their jobs, and denied the right to associate freely, travel or run their businesses. Instead of working to get back to normal as quickly as possible, the Biden administration seems determined to impose even more restrictions on us.

The US was built on the principle of democracy – As Abraham Lincoln called it, “government of the people, by the people, for the people.” We call ourselves the ‘Land of the Free’ and pride ourselves on our past and present liberties. Now, a respected think tank says we’ve taken a turn in the wrong direction. We need to get back on track – but so far, President Biden seems to be doubling down on his turn towards authoritarianism.