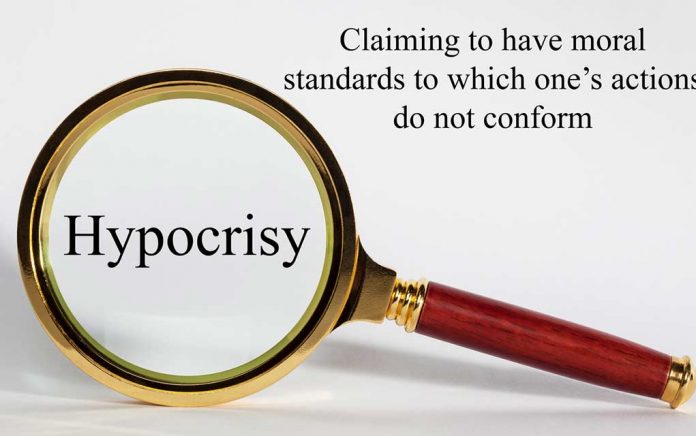 (ConservativeStar.com) – Democrats have a hypocrisy problem. Loyal Conservatives have watched for years as they accuse the GOP of corruption only to turn around and engage in the very same actions themselves. In fact, it often seems as if they spend more time looking for ways to point the finger outward than they do on fixing their own party. These examples showcase a few of the worst offenders.

Left-leaning Democrats led the initial charge on the #MeToo movement. At first, the goal seemed noble: give women victimized by sexual assault a voice. But it was really a response to President Trump nominating Brett Kavanaugh to the Supreme Court. You see, a woman named Christine Blasey-Ford had accused him of sexually assaulting her in high school at around the same time as his nomination. Despite there being little evidence to prove it was true, Democrats insisted we “Believe All Women.”

Yet now, as Biden is pushing for the presidency, he faces the same issue. Former domestic violence expert Tara Reade claims the DNC frontrunner sexually assaulted her two decades ago. But this time, Democrats aren’t rushing to the woman’s defense or even insisting we believe her. Instead, they’re engaged in a protracted smear campaign to prove her wrong.

If this had happened to Christine Blasey-Ford, there would have been riots. Yet, they exempt Biden from facing the same fate as Kavanaugh, refusing even attempts at fair investigation. It would simply be too damning for them when the next election rolls around.

My Body, My Choice

“My Body, My Choice” is the core of Leftist beliefs surrounding abortion. They believe women should have the right to control their own bodies, and everything contained within them, at all times. And most importantly, they do not believe that anyone — doctor, politician, or otherwise — should be able to place legislative restrictions on them.

Yet, now, at a time when it’s rapidly becoming clear that the healthcare and pharmaceutical industries cannot be fully trusted, they simultaneously push for mandatory vaccines. In fact, some would even see children prevented from accessing an education while their parents are jailed for refusing to vaccinate.

And then, there’s the issue of closing the entire country and locking people down out of fear they might catch coronavirus. Shouldn’t that choice be up to them?

Where is My Body, My Choice, now?

Democrats blasted President Trump for using drones to “assassinate” Iraqi war leader Qassem Soleimani in late January 2020. They called him unethical and tried to suggest he was a warlord just for considering the use of drones in the first place.

The problem? President Barack Obama did the very same thing when he was in power. In fact, the sheer volume of the attacks he directed was nearly 10 times higher than those released by George Bush during his time in office. Obama even commended the use of drones for their ability to be “surgical and precise.” That’s certainly NOT what Democrats are saying now.

There are other blatant examples of hypocrisy out there, too. Hillary Clinton denounced Harvey Weinstein for sexual advances on colleagues. Yet, her own husband has a history of using his position of power to gain sexual favors from interns. The DNC spent nearly two years trying to accuse President Trump of colluding with Russia… but there’s evidence of Hillary Clinton collaborating with Russian companies to further her own agenda.

How many times can the Democrats show their willingness to exempt themselves from ethics and the law before the Left takes notice? Perhaps the ostrich should be the new party mascot.