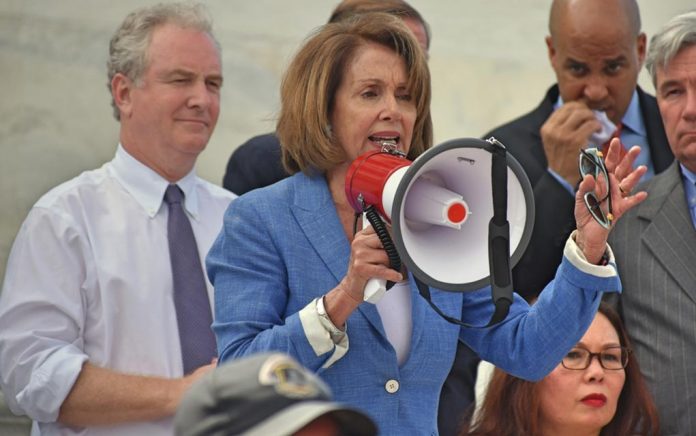 (ConservativeStar.com) – Speaker of the House Nancy Pelosi (D-CA) is growing increasingly hostile. Democrats only have control of the House of Representatives, and that’s stymied her ability to pass any of the party’s radical agenda. On Saturday, August 22, Pelosi called the full House back to vote on a proposed $25-billion US Postal Service package. However, she knew it was dead on arrival in the Senate.

The legislation wasn’t a serious proposal, and the partisan passage of the bill was a publicity stunt to garner public sympathy for universal mail-in voting initiatives that President Trump and Republicans oppose. Rep. Doug Collins (R-GA) immediately called for Pelosi’s resignation over her inflammatory language:

The Speaker of the House of Representatives just called the President of the United States and Republicans in Congress "domestic enemies… enemies of the state."

Her words are beneath the office of Speaker and she should resign immediately. pic.twitter.com/W6PLBxXN6c

On Monday, the speaker lashed out and called Republicans an “enemy of the state.” The term is ordinarily used for people who are traitors. In a sharp rebuke by Rep. Steve Scalise (R-LA), said hypercharged words like this are what led a gunman to shoot and leave him for dead on a ballfield near the National Mall a few years ago.

In other words, how long until some other lunatic decides to attack Republican lawmakers are listening to language like Pelosi’s?