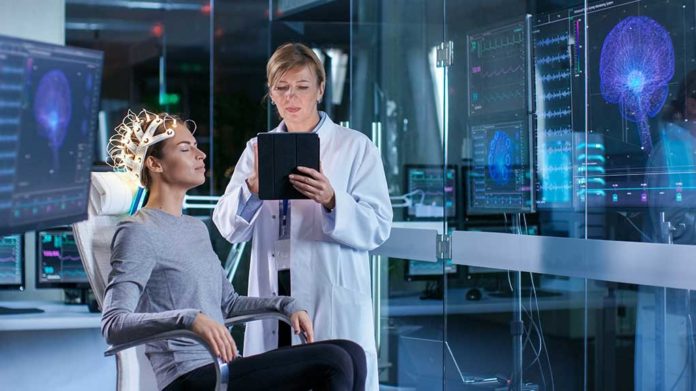 (ConservativeStar.com) – It’s easy to imagine a post-apocalyptic science fiction movie with an opening montage showing a man warning the world about the dangers Artificial Intelligence (AI) poses to the existence of humankind — and being the first to build the robot just a few years later. In the real world, one needs to look no further than the billionaire owner of Tesla, Elon Musk, for an eerie parallel.

Another of Musk’s companies, Neuralink, just put out an advertisement in hopes of hiring a clinical trial director who would oversee their project that hopes to implant microchips in human brains beginning in 2022. The company did manage to put one into the brain of a monkey that played a game of Pong without a physical interface to the computer.

Explaining the need to test on human subjects to move the process along, Musk wrote in a Twitter post that it’s “hard to have nuanced conversations with monkeys.”

Replacing faulty/missing neurons with circuits is the right way to think about it. Many problems can be solved just bridging signals between existing neurons.

Progress will accelerate when we have devices in humans (hard to have nuanced conversations with monkeys) next year.

One of the company’s first hopes is to help quadriplegics regain some freedoms by allowing them to access their electronic devices with their thoughts on a high-bandwidth interlink.

Other scientists envision using the technology to help detect and prevent brain cancers and even help those with severe neurological damage move past just manipulating their digital presence into actual physical movement. Of course, at this point in time, it’s impossible to determine how much or how little effect this could have.

Rise of the Machines?

According to CNBC, Musk appeared on its channel in 2014 and spoke of his concern about AI-powered robots, referencing the 1984 Arnold Schwarzenegger/Linda Hamilton movie “The Terminator.” He went even further in 2017, while speaking at the National Governors Association, where he said the technology “is a fundamental existential risk for human civilization” that people don’t fully grasp, as reported by National Public Radio (NPR).

Fast forward to 2022, and the tech mogul now says he’s working on a Tesla Bot, a humanoid-shaped AI, that would be able to perform repetitive, dangerous, and menial tasks now done by humans. But, he’s already looking far beyond that, saying eventually Optimus — the project codename — could become an “incredible buddy like C-3PO or R2-D2 [the two droids made famous in the first Star Wars movie].”

Like almost all technology, it’s inherently neither evil nor good. That’s completely up to the people and how they apply it. However, it does raise a question to be considered, much the way people now view the use of atomic bombs, should we do it just because we can?