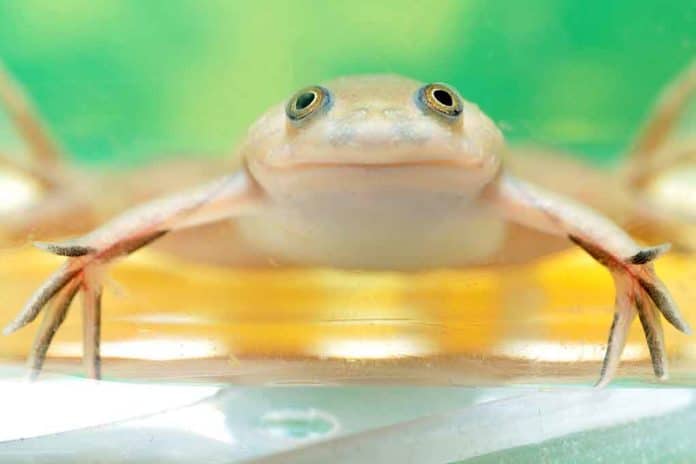 (ConservativeStar.com) – When one thinks of frog legs, many would picture being seated in a Michelin star restaurant waiting for a server to bring dinner to the table, not something that could be the start of a revolutionary medical breakthrough. However, a group of researchers was surprised to find out that they were able to stimulate the regrowth of a functional leg in a group of the amphibians.

Not Too Pretty, But It Worked

In a study of 115 African clawed frogs, the group that received a protective cap with hydrogel infused with a five-drug cocktail gave the scientists a bit of a shock. After about four months, the frogs started growing complex limbs with bone, cartilage and nerves. These animals are similar to humans because they generally don’t regrow bones on amputated limbs.

One of the lead authors on the research paper that came from the experiment, Dr. Michael Levin, Ph.D., of Tufts University, said that while it’s not a perfect replica in looks, “functionally, it’s great,” according to the New York Times.

From Farm to… Chest Cavity??

Frogs aren’t the only players in the medical marvel arena either. A 57-year-old man by the name of David Bennett was suffering from terminal heart disease and was denied a spot on the transplant list because his condition was so bad. That’s when doctors at the University of Maryland Medical Center presented him with an experimental option that appeared to be his last chance to live, so he took it.

His life-saving option? Get a new heart from a pig. The replacement heart came from a pig that had been genetically engineered to eliminate genetic features that would’ve caused a human body to reject the organ. That surgery took place on January 7, 2022, and reports indicate that two weeks later, Mr. Bennett is still alive.

As with many groundbreaking projects, this one wasn’t without a few hurdles researchers had to overcome. First, they had to get special permission from authorities to perform the previously untested procedure, which they did. The second problem arose with American drug enforcement officials because the mixture of liquids used to preserve the pig heart coming from Sweden included cocaine, a controlled substance in the US.

While the heart was the first full-on transplant, in late 2021, surgeons at the New York University Langone Health center attached a genetically altered pig kidney to the exterior of a brain-dead individual whose family was ready to remove from life support. Once attached to all the proper blood vessels and ductwork, it began its job of cleansing the blood of toxins for the patient.

The idea of what’s called xenotransplantation has been around since at least the mid-1980s when doctors put a baboon heart in newborn “Baby Fae,” which was ultimately rejected by her immune system. However this is an important research path because more than 105,000 Americans are waiting for organ transplants, and 17 die every day due to a lack of human donations.