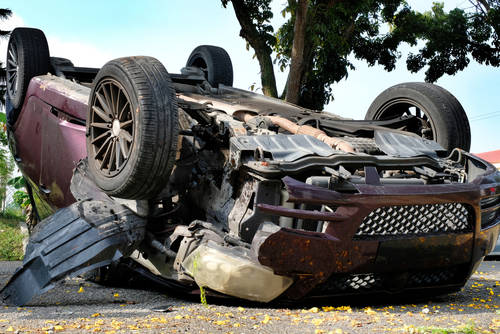 A firefighter was seriously hurt after a car shifted and fell on his leg during a two-car crash in Hell’s Kitchen.

A SUV rammed into a car en route to a dinner. The driver hit the gas and caused the car to move forward, and a major crash occurred.

The firefighter got injured while trying to stabilize and brace the two cars after an Suv drove on top of a sedan at the busy intersection. Horrified onlookers could be heard screaming as Warnock’s leg snapped and he became trapped.

First responders arrived on the scene of an accident in midtown Manhattan Sunday afternoon, where a BMW SUV tipped over onto a firefighter, pinning him below. Bystanders and other firefighters immediately rushed to help.

Footage shows the fireman leaning into an overturned SUV as his teammate prepares a yellow beam to help rescue the trapped occupants. The SUV then tips onto its side, crushing the firefighter underneath.

Shockingly, the firefighter continued to rescue passengers after his injury in order to complete his work. He was able to pull the driver out of the car with the help of bystanders.

Afterward, he was taken to Bellevue Hospital. His leg injuries are severe, but he is currently in stable condition.

To learn more about this story, check out the news outlets listed below.