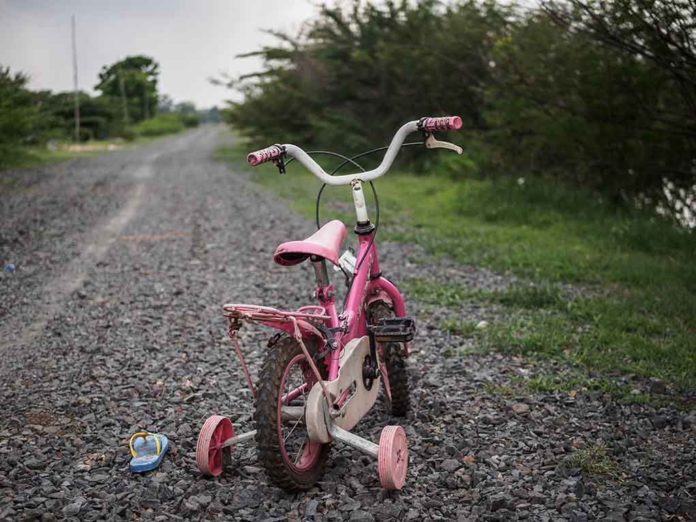 (ConservativeStar.com) – Harmony Montgomery was 5-years-old the last time anybody recalls seeing her in October 2019, which in and of itself is a horrible event. However, what compounds that horror is that police didn’t discover she was missing until December of … 2021. Yes, that means a little girl went missing, and the police didn’t know or start searching for her for over two years.

Two years ago, Harmony lived in a house at 77 Gilford St. in Manchester, NH. Her great uncle, Kevin Montgomery, lived in the house with the little girl, her parents, and “several [other] family members.” Before that, Harmony had been in the Massachusetts foster care system along with her brother Jamison. By 2019, she’d been reunited with her father, according to the man who adopted the younger boy.

Kevin, who’s her father’s uncle, said she “looked like a scared puppy” on that fall day in October of 2019 and that he was trying to get into the house but was locked out — so he called the police.

After that incident, Harmony’s father cut off all communication with a number of family members, including his uncle.

The Search Is On

The mayor’s office of the city received an email towards the end of December 2021 regarding the girl and issues with the state Division for Children, Youth and Families (DCYF), which they forwarded to the Manchester Police Department. On January 2, 2022, police went to the home and, according to neighbors, erected a tent and blocked off views with tarps in the backyard from approximately 8:30 a.m. until just after 2:00 p.m. One neighbor claims they saw police dogs entering the home during that time.

Records from the Manchester city assessor indicate a new owner took possession of the house on May 14, 2020, and officials say that person is cooperating with the investigation.

There is now a $20,000 reward available to anyone who provides information that leads police to the young girl. Local businesses have banded together to try to find the little girl, donating most of the money that’s available for the reward.

Authorities have also arrested the girl’s father, Adam Montgomery, in connection with an assault on the little girl from 2019.

UPDATE: Harmony’s step-mother, Kayla Montgomery, has been arrested on welfare fraud charges, relating to receiving $1,500 in food stamps meant for Harmony between December 2019 and June 2021. Montgomery is being held on $5,000 bond.

Detectives ask anyone with information about the child to call 603-203-6060. The tip line is manned 24/7. Even the smallest detail could help officers find Harmony.

To report Information on other cases, contact the National Center for Missing & Exploited Children at 1-800-THE-LOST (1-800-843-5678) 24 hours a day. To report the sexual exploitation of a child, go to CyberTipline.org.