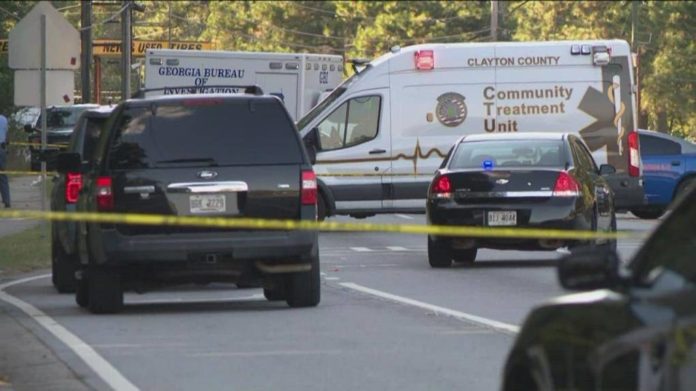 A K-9 Officer was shot in the line of duty and died from its injuries. The suspect and the K-9 Officer were both killed in a confrontation with lethal consequences.

Police spotted a car associated with a murder investigation and tried to stop it. State troopers used a PIT maneuver to stop the driver, and tried to make contact with him peacefully, but he was not cooperating with investigators. A K9 was sent into the woods to coax the man out.

Police say a suspect connected to a homicide case shot a K-9 Officer named Figo after the K-9 tried to make contact with the suspect. The K-9 was taken to a local vet and the scene was secured in front of West Clayton Elementary School. It was there that the K-9 died from the gunshot wounds he endured.

The driver of the car was also killed in the exchange of gunfire. The suspect took off from the police officer and was later shot dead by officers after he opened fire on the dog.

The scene was secured in front of West Clayton Elementary School.

The Georgia Police K9 Foundation has set up a memorial fund in honor of Figo.

For additional information on the death of this K-9 officer and homicide suspect, please consider the news sources that are listed below to stay in the know.