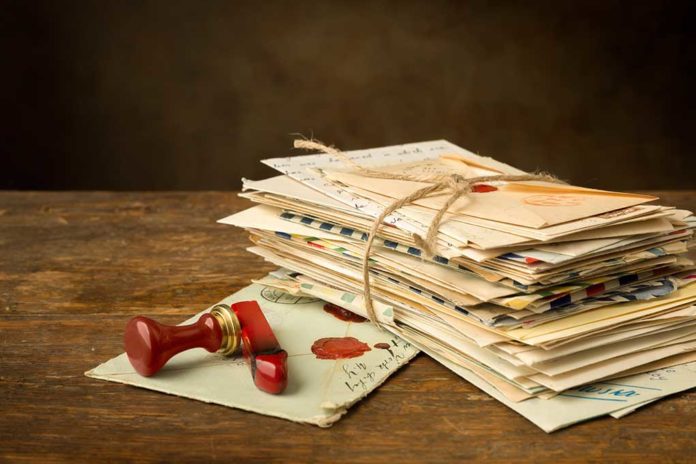 (ConservativeStar.com) – A mother in Preston, Lancashire, England recently had a day where she accomplished the almost impossible and uncovered a nearly century-old scandal. Her miracle-working skills were on full display as she managed to get her 14-year-old son to help clean their house. While engaged in that endeavor, they discovered a note written by a man named Ronald to his own Hester Prynne — the adulterous protagonist of The Scarlet Letter.

As mum Dawn Cornes and her son Loukas were doing their chores, he moved the dresser in his room, causing the 55-inch TV to fall to the floor, breaking some of the tiles (possibly the most important detail has been omitted from the narrative and that’s whether or not the big-screen television survived). The pair decided to pull up a section of the flooring, and Loukas may have shown he has a future as a fortuneteller when he said it would be funny if they found something hidden beneath them.

The mom and son duo did, indeed, discover something hidden — Ronald’s letter to his lady love imploring her to “try every morning to come and see me… But please don’t tell anyone because it must be a secret….” Dawn posted a picture of it on social media, and internet sleuths tried to track down the writer, but alas, the fate of the star-crossed lovers remains a mystery. Some estimated the note was written in the 1920s.

The new “old adage” says anything one posts on the internet will be around forever and cannot be completely erased. Apparently, the same can be said for ink on paper if someone doesn’t do the simple expedient thing and throw the dang thing away.