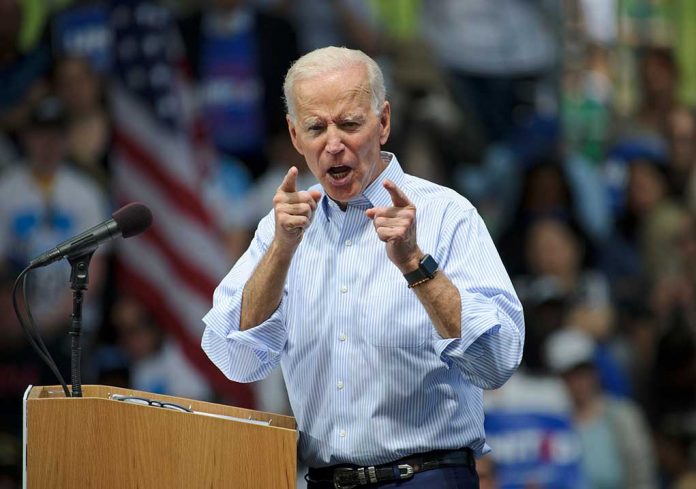 (ConservativeStar.com) – The Delta variant of the novel coronavirus is spreading across the world. It has caused governments in several countries like China, the Philippines, and Cambodia to reinstate lockdowns in some areas, while in the United States mask mandates are returning. Now, President Joe Biden is taking drastic steps in the US.

No, that’s not a basketball coach yelling at a hesitant point guard. Rather, it is President Joe Biden delivering an order to government employees and contractors. He bluntly said, “If you want to do business with the fed government, get your workers vaccinated.”

Those who still refuse to get the jab will be forced to wear masks while indoors, face strict social distancing guidelines, and be subject to frequent testing for the virus. The president said he wants to set an example for the private sector, hoping that corporations will tell employees that they must prove their vaccination status.

This directive has faced some pushback. The Federal Law Enforcement Officers Association (FLEOA) with 30,000 members spread across several agencies, has indicated that they believe Biden may have exceeded his authority, morally if not legally. FLEOA President Larry Cosme said that a mandate like this “is not the American way and is a clear civil rights violation.”

On a Related Matter

Speaker of the House Nancy Pelosi (D-CA), never one to hold back on exercising the power of her gavel, took her mandates regarding masks even one step further. A tweet sent by Congresswoman Kat Cammack (R-FL) included what she indicated was a copy of the memo sent by the Speaker.

In today’s edition of Pelosi’s abuse of power, Capitol Police have been directed to arrest staff and visitors to comply with her mask mandate for vaccinated individuals.

For Members, they advise not arresting but “reporting Members to SAA for their failure to comply.”

In it, Pelosi directs the United States Capitol Police (USCP) to inform all staff and visitors that these coverings are required and that if they do not comply or leave the premises, they could be arrested. She graciously exempted members, saying that they only need to tattle to the sergeant at arms.

Perhaps she is unaware that somebody else already took care of that…like the Founding Fathers. Article 1 section 6 of the United States Constitution says about members of Congress, “They shall in all Cases, except Treason, Felony and Breach of the Peace, be privileged from Arrest during their Attendance at the Session of their respective Houses…”

Representative Roger Williams (R-TX) took to his Twitter feed and said “Nancy Pelosi just appointed herself dictator… She’s a tyrant and a disgrace…” because of her order. While those terms may or may not be literally true, it’s hard to dismiss the opinion of somebody who interacts with her so often.

The latest moves by the Democratic leaders are incredibly concerning and beg the question: Are these mandates even constitutional?