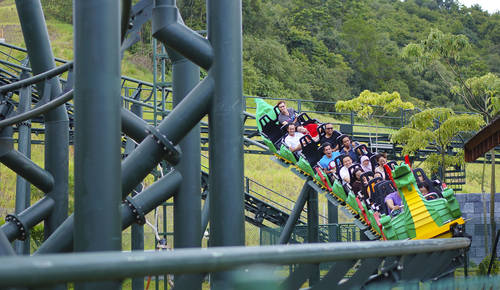 At least 31 people were injured when two rollercoaster trains crashed into each other at a Legoland amusement park in southern Germany.

The accident happened after two rollercoaster trains collided with each other. It was not immediately clear why the crash happened.

38 people total were on the two trains in the ride that crashed into one another. There were no passengers that treated for severe injuries or declared dead. Rather, the 31 people who were seen by medical professionals all had relatively minor injuries.

Three helicopters were deployed to the scene in an attempt for rescue. The amusement park ride will be closed for the time being for repair and evaluation so that future accidents like this one don’t happen.

The Fire Dragon is a roller coaster aimed at young guests and is similar to The Dragon at Legoland New York and Legoland Windsor. Legoland’s Fire Dragon ride takes riders through a dark indoor area before emerging outside to a large, twisting track. It’s relatively mild, only going up to 18mph.

The accident was handled quickly. The guests on the ride were immediately evacuated and attended by trained resort staff. Legoland Germany said it evacuated guests from the trains and that emergency personnel, paramedics, doctors, the police and the fire fighters were all on site within few minutes.