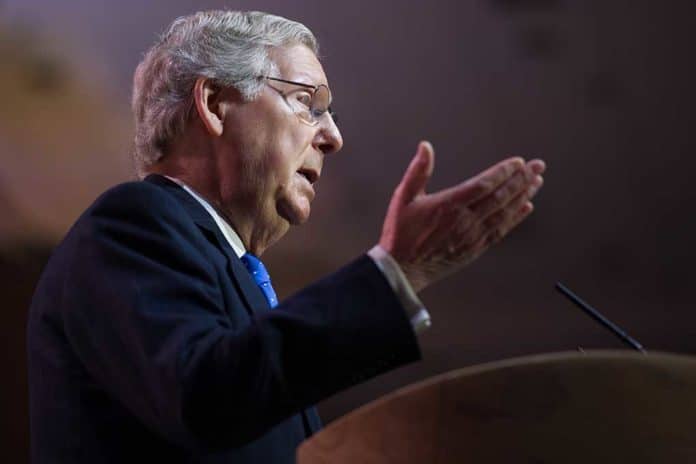 (ConservativeStar.com) – It’s the plot of countless movies and television shows: boy meets girl, boy and girl fall in love, boy and girl go their separate ways because… well, it’s complicated. The same is true of American politics, usually involving compromises between parties. However, sometimes the drama takes place within a party, like the feud between former President Donald Trump and Kentucky’s Senator Mitch McConnell, the top Republican in the upper chamber.

After the disastrous events of January 6, McConnell allegedly made an effort to keep the Trumps far away from the inauguration of Joe Biden, according to author Jonathan Karl. The ABC News White House correspondent wrote about the senator’s efforts in his soon-to-be-released book, Betrayal.

Wanting to short-circuit any more disruptions to “the peaceful transfer of power,” McConnell reportedly proposed having the top four members of Congress write a letter to Trump making it clear he was not welcome to attend. However, House Minority Leader Kevin McCarthy (R-CA) refused, saying that it would signify unity within the Republican Party if he were there. In the end, President Trump trumped the senator by preemptively announcing he had no intention of being there.

The battle between the senator and former president continues almost a year later, recently over the infrastructure bill. President Joe Biden signed into law the bipartisan infrastructure bill that some conservative pundits and politicians like Senator Rick Scott (R-FL) didn’t support.

McConnell led a group of 19 senators in getting that $1.2-trillion legislation approved. The effort prompted President Trump to ponder why “that Old Crow” did that now when he couldn’t accomplish the same feat when Republicans controlled both Congress and the White House during his administration.

While still trying to portray the Republican divide in a negative light, even the Democratic Senatorial Campaign Committee recognizes that the upcoming midterm elections will be a referendum on the two men’s ideologies.

Senator Scott has said that issues like the massive inflation rate Critical Race Theory (CRT) will win the races. However, he also noted that only a “foolish” candidate wouldn’t covet and accept an endorsement from the former president. Another factor to consider is that the results of the 2022 midterm elections could be a predictor of the potential of a 2024 Trump for President campaign.

Seems a lot is riding on which side of the GOP fence wins out. Will McConnell’s establishment win or Trump’s America First wing?