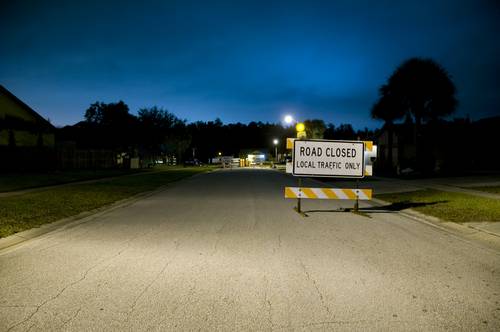 A neighborhood was hosting their annual “Halloween on the Boulevard” block party when complete chaos broke loose.

Police shot a driver who nearly hit a huge crowd of Halloween trick-or-treaters Monday night. Footage shows the driver trying to drive through barricades that blocked off the party and attempting to drive through crowds of people that were celebrating. The scene was terrifying for all those involved.

There was a big block party to celebrate Halloween at the time of the incident. Police and firefighters were already on the scene for the party when the suspect began recklessly through the crowd shortly after 7pm on Halloween night.

Video from neighbors shows a gold sedan driving through barricades, stopping at a crowded street, then accelerating into the crowd.

Neighbors said the man drove down the boulevard, hitting several cars, but didn’t hit anyone. The neighborhood was filled with hundreds of people, and the event itself attracts thousands over the course of the holiday season. The odds of attendees being safe in a reckless circumstance such as this is extremely rare.

Police also don’t believe the driver hit anyone, and there are no reports of any other serious injuries from people that attended the Halloween celebration.

Omaha police claim that the driver was headed for the police that were on the scene during the party. It was at this point that an officer fired his weapon and shot the crazed driver. After being shot, the driver was taken to the hospital in serious condition.

Investigators talked about a possible motive for the driver’s heinous actions during a Sunday afternoon news conference. More information will be released as interviews take place with witnesses and the investigation expands the authorities’ pool of evidence.