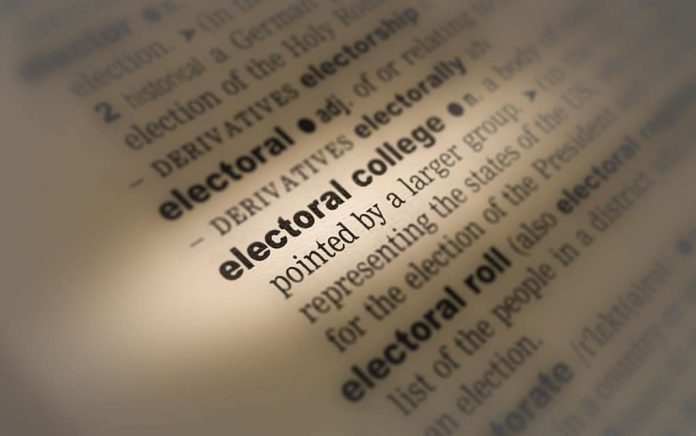 The results of the 2016 Presidential Election had Hillary Clinton with more popular votes while Donald Trump accrued more than the prerequisite 271 electoral votes. This has brought the Electoral College to the forefront of American politics, even though this is only one of five times this has happened. Presidents who didn’t win the popular vote include:

So, while it’s an unusual happenstance, it’s not the highjacking of the election some of the Democrats and mainstream media make it out to be.

What Is the Electoral College?

The Electoral College is described in Article II § I of the Constitution of the United States of America, later updated by the 12th, 20th and 25th Amendments. On the first Tuesday after the first Monday of November, voters go to their assigned polling places and cast their ballots.

It’s important to note that while called a “national election,” it’s 50 separate events taking place, one within the borders of each state. The vote is then tallied and depending on who wins, a slate of electors is designated to cast the states’ electoral vote. Each state gets votes equal to the number of Senators and Representatives representing them.

The framers of the Constitution settled on this compromise as the best way they could devise to stop more populous states running roughshod over smaller ones. Based on 2019 estimates, the five most populated cities have a combined total of roughly 6% of the total of the country. That might seem insignificant, but considering those metropolitan areas typically carry their states, they have a massive influence over 153 of the required 271 votes (56%) needed to win the presidency, it’s not hard to see how a tiny portion of the citizenry could decide the highest office in the country.

Upset with the perceived usurpation of the Oval Office, some states (almost exclusively Liberal or Liberal-leaning) have enacted legislation to participate in the National Popular Vote Interstate Compact. This agreement says that each signatory state would mandate, by law, that all their electors be forced to vote for the candidate who wins the popular if the number of member states’ electoral total reaches 271.

This is a blatant attempt by the political left to nullify part of the Constitution they all ratified prior to admission to the Union without going through the process the document gives for amending it. The mechanism to alter that instrument requires two-thirds of both Houses, or that number of states, calling for a Constitutional convention to even start the procedure. The odds of either method working is so small, it may as well be zero.

That about sums up the Electoral College what, when and why questions. It’s the best safeguard the Founding Fathers could develop to protect the rights of the less-populated states. Is it perfect? Nothing made by man is, but it’s worked for nearly 250 years. One political party should not be allowed to effectively cancel a part of the Constitution because they’re throwing the longest hissy fit in the history of the country.