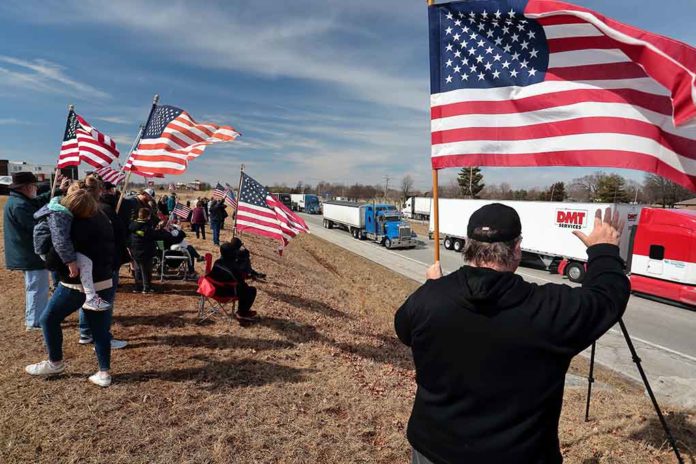 (ConservativeStar.com) – Apparently there are still people who believe in the freedoms that the United States of America was founded on, and some are willing to drive across the country to make that point. The People’s Convoy left Southern California on February 23 and arrived in Hagerstown, Maryland, on March 5. As Senator Ted Cruz (R-TX) put it after meeting with a group of truckers, they have a common cause in trying to end the “tyrannical COVID-19 mandates.”

It seems that their trek across the continent and a couple of loops around the Washington, DC Beltway got the attention of several Republicans. Cruz and Senator Ron Johnson (R-WI) met with organizer Brian Brase and several other participants to discuss their concerns. Meeting with lawmakers was one of Brase’s goals as he said before he ever left the Golden State and the media attention that came with it made it “a win for me,” he said.

Another group from the protesters spent some time speaking with Republicans who sit on the House Transportation Committee including Representatives Sam Graves (R-MO) and Garret Graves (R-LA). A third group was greeted by Representatives Marjorie Taylor Greene (R-GA), Matt Gaetz (R-FL), and Thomas Massie (R-KY).

What’s your opinion on all of this? Do you support with the Convoy stands for, and will the attention from Republican lawmakers and media coverage make a difference?