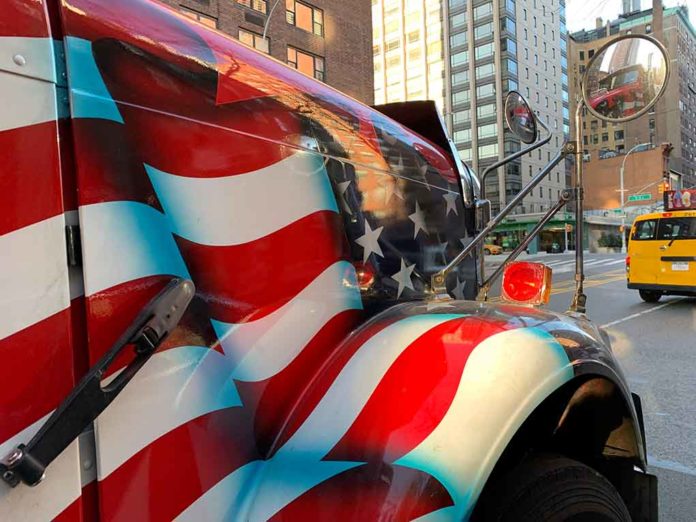 (ConservativeStar.com) – According to the National Geographic website, a typical boa constrictor can grow up to 13 feet long and weigh as much as 100 pounds. The reptile kills its prey by wrapping around and suffocating it. Taking a page from the Canadian truckers’ Freedom Convoys, several Americans are planning to drive down to Washington, DC. Bob Bolus of Scranton, Pennsylvania, who is organizing one of the convoys, may have been looking at a map of the area around the nation’s capital when he used them as an analogy.

The Capital Beltway (Interstate 495) makes a loop around the city, traveling through Maryland and Virginia. This is where Bolus hopes to draw the attention of the world in the run-up to President Joe Biden’s State of the Union address on March 1. While giving an interview on his plans to Fox 5 DC, reporter Lindsay Watts asked if he was aware of the effect this would have on people commuting to work and potential problems to first responders heading to emergencies.

Bolus responded, saying “there will be a lane open for emergency vehicles, they’ll be able to get in and out and all that… As far as if they can’t get to work, geez that’s too bad.” District of Columbia police chief Robert Contee had mentioned that one response might be similar to what police did on the Ambassador Bridge between Windsor, Ontario and Detroit, Michigan when they began towing semis that were blocking it.

However, the news station reported that unnamed police sources informed them they’re having trouble finding towing companies that would be willing to help them. Perhaps that’s unsurprising since Bolus is one of their own. He’s the proprietor of a truck parts and towing company in his hometown.

The protest is not necessarily centered around COVID-19 vaccine mandates like the Canadian version, but organizers also want to bring attention to other things they see as problems. According to Bolus, other issues he wants to highlight for those who “voted for these people” include trucker rights, fuel prices, taxes, and critical race theory (CRT).

Another group, billing itself as “The People’s Convoy” in Adelanto, California, plans to leave the West Coast on the morning of Wednesday, February 23. They issued a press release about their cross-country trip. It says the people making the trip are “of all colors and creeds” including, Christians, Muslims, Republicans, and Democrats.

Their website says their purpose is “to restore our once perfect union [and that they] do ordain and establish the restoration movement.” Further, they’re demanding that the declaration of national emergency that was put in place because of the pandemic be lifted.

Then, there is the “American Truckers Freedom Convoy” whose page says they intend to make a peaceful expression about the issues that concern them. Like the Bolus group, it isn’t just about vaccine/mask mandates but includes things like securing the southern border and fighting against censorship by Big Tech and the Government.

Do you, our readers, support these peaceful convoys letting the president and Congress know that many people across the country are fed up?