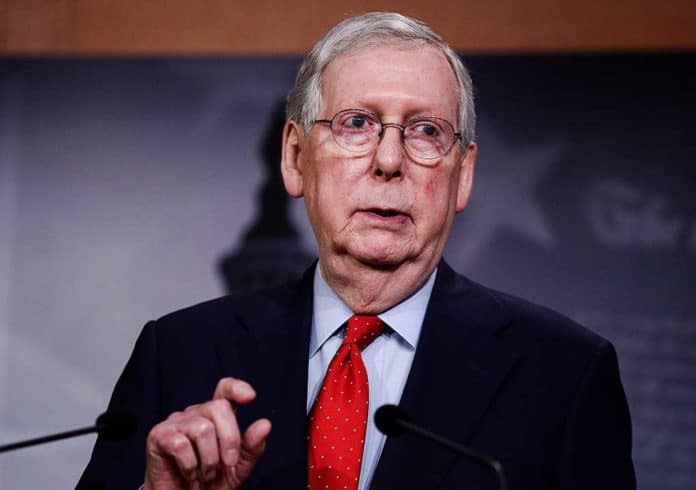 (ConservativeStar.com) – The Republican National Committee (RNC) has censured Representatives Liz Cheney (R-WY) and Adam Kinzinger (R-IL) for “participating in a Democrat-led persecution of ordinary citizens…” in regard to their participation in the January 6 committee. Senate Minority Leader Mitch McConnell (R-KY) admonished the group for that — which led to a swift and very pointed response from former President Donald Trump.

On Wednesday, February 10, Trump issues a statement saying McConnell doesn’t speak for the Republican Party. He went on to say the Senate minority leader doesn’t represent the views of the majority of the GOP. Trump slammed him for doing nothing to stop the “lawless [Joe] Biden Administration, the invasion of our Borders, rising Inflation” and a number of other policies. In a follow-up statement, the former president called the senator an “Old Crow” is “against what Republicans are about.”

"For the Old Crow Mitch McConnell to say that the RNC should not censure walking Democrat sound bites, Liz Cheney and Cryin’ Adam Kinzinger, is so against what Republicans are about. It’s not as bad as the two-month extension he gave the… pic.twitter.com/IFsYuUhsoQ

According to a December 29, 2021 Reuters/Ipsos poll, 82% of the respondents who identified as Republican have some shade of favorable view of President Trump — with 52% saying “very favorable.”

Further, when asked who they would vote for in the 2024 presidential election, 54% said it would be Donald Trump with the next highest being Florida Governor Ron DeSantis (R) at a mere 11%.

How do you feel about the future of the Republican Party? Is President Trump or Senator McConnell the person on the right path?