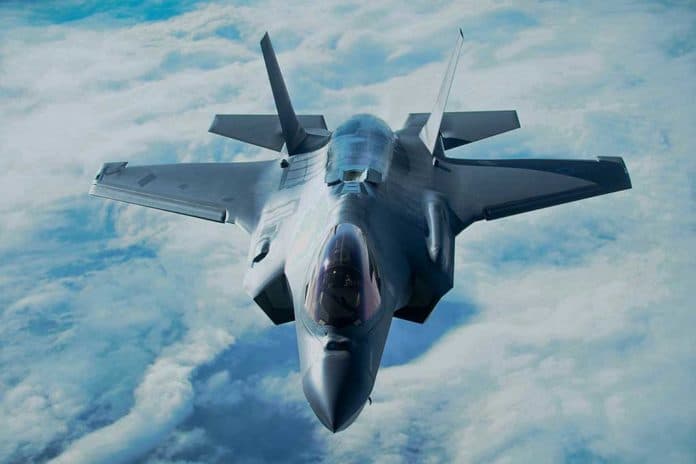 (ConservativeStar.com) – Lockheed Martin’s F-35B Lightning II is a stealth fighter jet with Short Take-Off and Vertical Landing (STOVL) capability, according to the company’s public online brochure. It’s an important asset to the British Royal Navy since its aircraft carriers use a ramp to launch their planes rather than the catapult system the United States Navy uses on their ships. That’s why a recent crash of one of the fighters is concerning.

On November 17, a UK F-35 crashed in the Mediterranean Sea upon takeoff from the HMS Queen Elizabeth. While the pilot survived and was rescued, the $135 million (£100 million) airplane is under as much as one mile of water. Now, the Brits and Americans are in a race to salvage it before the Russians start nosing around the area. A US Navy deep-sea recovery team is reportedly assisting in locating the wreck in order to bring it to the surface.

A British F35 pilot from HMS Queen Elizabeth ejected during routine flying operations in the Mediterranean this morning.

The pilot has been safely returned to the ship and an investigation has begun, so it would be inappropriate to comment further at this time.

The HMS Queen Elizabeth and its escort vessels were returning from a deployment to the Far East, and Moscow has been keeping it under close observation on its journey. It’s been reported that Royal Navy submarines are in the area to aid in the search. According to Sky News, UK’s Secretary of State for Defence Ben Wallace would neither confirm nor deny rumors that its Russian counterparts are in the area.

Given the top-secret technology built into the plane, the Western Allied nations would prefer to keep Vladimir Putin’s prying eyes as far away as possible.