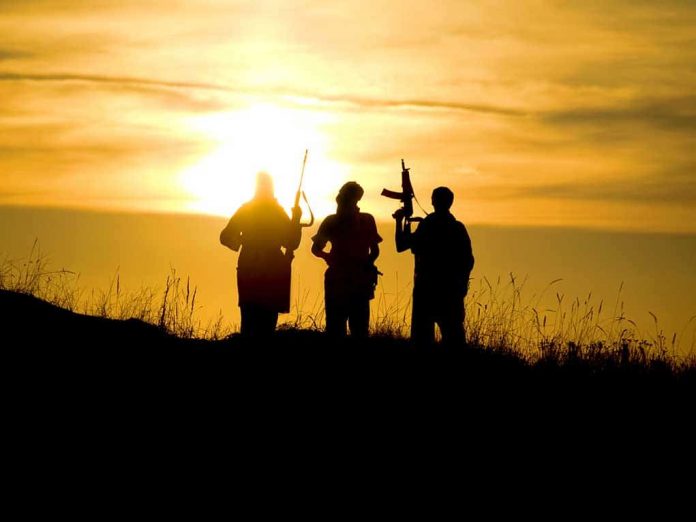 (ConservativeStar.com) – When President Joe Biden pulled the final troops out of Afghanistan and left weapons there for Afghanis to fight on their own, it wasn’t long until the Taliban took over. Now the war continues in the Middle East. Instead of battling Afghanistan and the United States, the Taliban is using those same US weapons to fend off an even more extreme group — ISIS-K. In fact, the group is going so far as to use our military tactics to defend against the ultra-radical and violent extremists.

On October 8, ISIS-K attacked a Shiite mosque in Kunduz during services. A suicide bomber killed at least 43 people and injured 140 others. Some sources say the death toll was more than 70. The off-shoot terrorist group is the same one that attacked the Kabul airport on August 26 and killed about 183 people, including 13 US troops.

Funerals for some of the more than 40 victims of a suicide bombing were held in #Kandahar on October 16. The IS-K extremist group claimed responsibility for the attack, which targeted a crowded Shi’ite mosque in southern #Afganistan during Friday Prayers.#ISIS #IS_K pic.twitter.com/B8JlseJGoH

Despite these attacks, Taliban chief spokesperson Zabihullah Mujahid insists ISIS-K isn’t a threat. A Taliban patrol commander, named Rahimi, goes on further to say they “guarantee security for the Afghan people.” Even so, those in the Shiite community believe ISIS-K will return to the mosque to kill more citizens and the facts back his fear. The group attacked Kandahar on October 15, killing more than 50 people, and they murdered 85 students in May at a school for girls in Kabul. Officials blame it for 77 total attacks in Afghanistan from January to April this year alone.

Sadly, only time will tell if the Taliban can or will use their newly found war chest to protect the Afghan people from the ISIS-K suicide bombings likely to come.