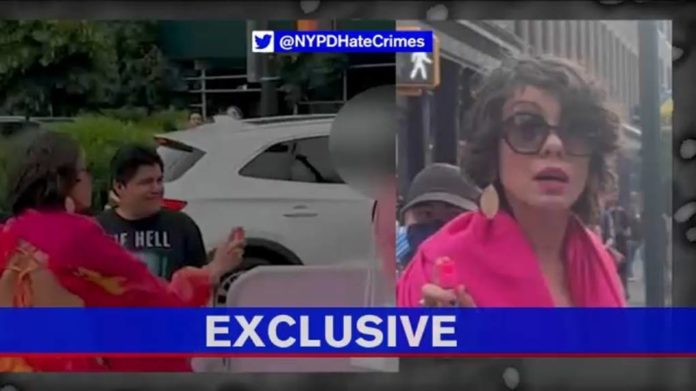 A 47-year-old woman was arrested after she was caught on camera pepper spraying four Asian women in a racially motivated attack in Manhattan last week. She faces hate crime charges for the attack, which left one victim unable to open her eyes.

Madeline Barker was caught on camera hurling racial insults at the victims and pepper sprayed them in the face. She was arrested after the footage went viral.

Four Queens women in their 20s were the victims that were pepper sprayed by Barker in Manhattan’s Meatpacking District on Saturday. Barker continued to yell at the women and shot one of them in the eye with the pepper spray before leaving the area.

Hate crimes have been on the rise in the Big Apple and nationwide, with 133 Asian Americans experiencing terrifying and dangerous experiences of discrimination in the city. One of the latest attacks took place in April, when a Chinese food delivery worker was gunned down.

The NYPD’s own figures show how hate crimes rocketed during the pandemic. Zhiwen Yan, 45, was shot and killed in Queens during an argument ‘over duck sauce’, and Steven Zajonc, 28, was arrested after allegedly assaulting seven Asian women.

The attacks come amid a continued rise in violent crime across the city, with robberies up 40.3 percent and rapes up 16.9 percent. Transit crimes are also up 53 percent, and 85 percent of residents support more transit cops in the stations.