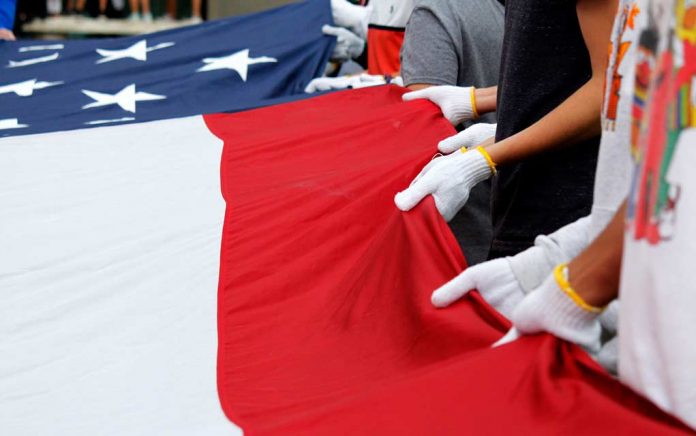 (ConservativeStar.com) – The American flag is one of our country’s most important symbols. It’s been the focus of songs, raised morale where there was none, and even brought comfort in times of loss and grieving. But many people don’t know what specific types of display mean, or how to do things like properly dispose of a worn and tattered flag.

What Does It Mean to Fly Half-Mast?

The American flag at half-mast is always a sign of respect and honor for the fallen. It’s lowered to half-mast when significant figures have fallen, and sometimes even as a means of honoring entire groups of people. The president often issues the order, but it can also come from local leaders, like mayors. The purpose is simply to show a nation at mourning.

What Is the Union Left?

Whenever the flag is displayed, whether it’s on a car, house or wall, the Union (blue part) goes on the top left from the point of view of the viewer from the front, not the hanger. For instance, the appropriate place to hang one from a car is from the right fender, with the Union at the top.

When Should a Flag Not Be Displayed?

The American flag is a symbol of hope and many other things. As such, it should never be displayed in inclement weather, in the dark, or in tattered condition. This is why you see lights shining on the flag in public buildings and some homes. When the flag is hung in the dark, rain, snow or sleet, it’s probably because the owner is simply unaware. The flag should also never touch the ground.

How Do you Fold the Flag?

What Is the Proper Disposal Method?

A ceremonial fire is used to dispose of American flags in worn or tattered condition. At the end of the ceremony, the ashes of the flag are buried, so it’s important that the fire used is large enough to consume the entire thing. First, it has to be folded using the proper method. Then, those present should come to attention and salute the flag before saying the Pledge of Allegiance. Finally, place it on the fire until it is entirely consumed. Finally, bury the remnants.