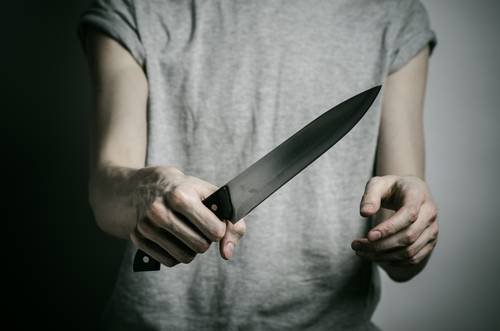 Officer Zachary Rutherford and trainee Officer Michael Hazel were out on patrol when they were alerted about a man with a knife attacking a woman. They immediately requested backup and drew their duty pistols when they approached the suspect.

Tyree Moorehead, the ‘no shoot zones’ activist, was shot dead by police on Sunday after the incident in Baltimore, Maryland. The suspect was shot by police after he got on top of the victim and brought the knife just inches away from her head. The victim was not injured during the incident.

Footage showed Officer Rutherford arriving at the scene and shooting Moorehead during this dangerous incident.

Moorehead dove on top of a nearby woman and pointed a knife at her face. This prompted Officer Rutherford to fire at the man, ultimately ending his life. Moorehead fell to the ground and was lying on his back several feet away, bleeding from multiple gunshot wounds.

Witnesses questioned the number of shots fired at Moorehead, saying the officer should not have shot him so many times.

Investigators do not believe the woman knew her attacker.

Moorehead’s family said he suffered from mental health issues and that his behavior had become more erratic in recent months. They also agreed with witnesses in saying the police should not have shot him so many times.

Moorehead’s cousin blamed police for making the former activist feel paranoid and said the officer’s use of force was excessive and that Baltimore police need more training to deal with people who are struggling with mental health issues. He hopes his cousin Tyree Moorehead is remembered for the positive things he did, including trying to help Baltimore City.