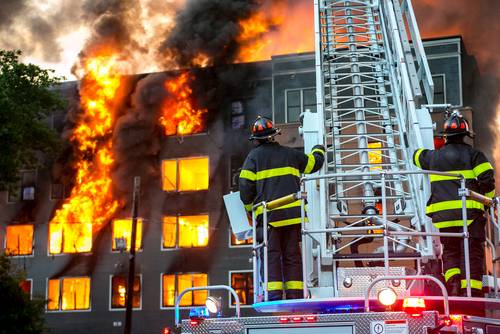 Firefighters received a call about a fire on the 20th floor of 429 East 52nd Street around 10:24 a.m. Saturday. Two people are in critical condition, and five people have serious injuries, according to EMS Chief Joseph Pataky. The rest of the people suffered minor injuries that are not life-threatening.

The amount of injuries, however, still remains at a relatively high number. At least 38 people were injured in total in a Manhattan apartment building fire Saturday morning.

Residents weren’t the only ones who were injured in the lithium fire. Five EMS members also suffered serious injuries while they were trying to respond to the emergency.

The fire was caused by a lithium-ion battery connected to a micro-mobility device. It likely started “right behind the front door” of the apartment where the occupant had been repairing bikes, according to the chief fire marshal. The FDNY recovered at least five bikes from the apartment that experienced the life-threatening fire.

Fire officials encourage residents not to charge micro-mobility devices overnight or to use batteries damaged for their devices in any way. The fire commissioner urged residents to be safe during the cold winter season and emphasized the importance of following the safest possible way to use e-bikes. That way, any future fires can be prevented.

When lithium induced fires ignite, they can spread extremely quickly. The combustion causes secondary fires that cause more problems and are hard to put out.