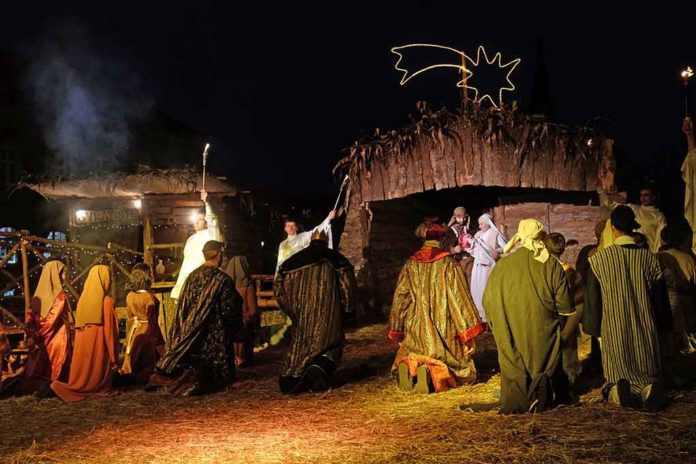 (ConservativeStar.com) – Animal control officers in a Kansas City suburb got a big surprise on Sunday, after a very unusual callout. Usually, they’re kept busy dealing with vicious dogs and the occasional wild animal that wandered into town – but this time they ended up pursuing a camel.

The National Agricultural Center and Hall of Fame in Bonner Springs, KS was very proud of their live nativity display, populated with authentic Biblical animals. But on December 8, all hell broke loose when one of the Arabian camels decided to escape.

a camel in Bonner Springs, Kansas escaped from a live nativity scene for over 12 hours.

“The camel was reunited with its owners and will go back to doing camel things,” said police

Police and animal control were quickly called as the half-ton animal made its bid for freedom, but it proved surprisingly difficult to catch. The camel first made for Sunflower Hills Golf Course, which is where quick-thinking cops borrowed golf carts to chase it – but, as Bonner Springs Police Department admitted, “we learned camels can run 40mph” – and golf carts can’t.

The camel then wandered off through several neighborhoods, leaving a trail of bewildered residents behind it. Finally, Animal Control Officer Anthony left her vehicle and pursued it on foot. Eventually, she managed to get close enough to capture it with a lasso; the camel was then treated for minor injuries caused by barbed wire fences, and reunited with its owners.

Bonner Springs PD’s Facebook page has had its busiest day in a while as locals share camel stories. The escape has added some excitement to the holiday season – but hopefully, the organizers of the nativity display have learned something about controlling big, powerful animals that evolved to live in some of the harshest environments on Earth. If a camel can survive in the Sahara Desert, Kansas City is easy.