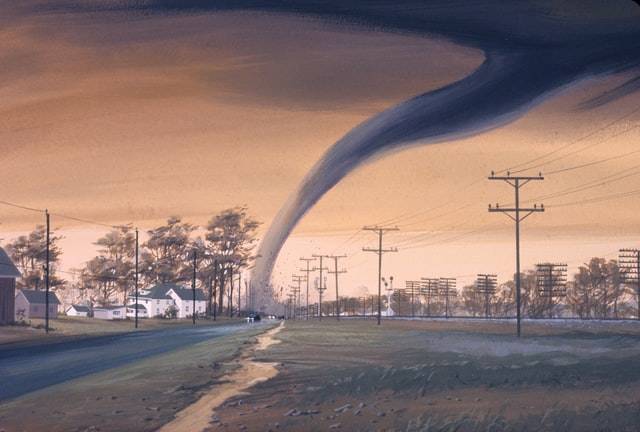 A rare northern Michigan tornado flipped vehicles, tore roofs off buildings, and downed trees and power lines in the town of Gaylord, killing at least one person and injuring more than 40 others.

Emma Goddard, 15, said she was working at the Tropical Smoothie Cafe when she got a phone alert about the tornado. She and her coworkers took shelter in the walk-in cooler. However, when they stepped outside, they saw three neighboring businesses completely destroyed.

One person was killed and more than 40 others were injured in the tornado that hit Otsego, Michigan.

A funnel cloud materialized out of a cloud, damaging a Goodwill store and a utility pole, and scattering debris all along the city’s Main Street. The Red Cross set up a shelter at a church.

Eddie Thrasher, 55, said a tornado appeared above him and destroyed RVs and industrial buildings. He ran into an auto parts store to ride it out.

Gaylord resident Brandon Smith captured video of a tornado that touched down just outside his house. He described the tornado sounding like a freight train and an air compressor going off in the garage.

Extreme winds are uncommon in this part of Michigan because the Great Lakes suck energy out of storms, but conditions that spawned Friday’s twister included a cold front moving in from Wisconsin and hot and humid air over Gaylord.

Find out more about this terrifying tornado at the following news sites: