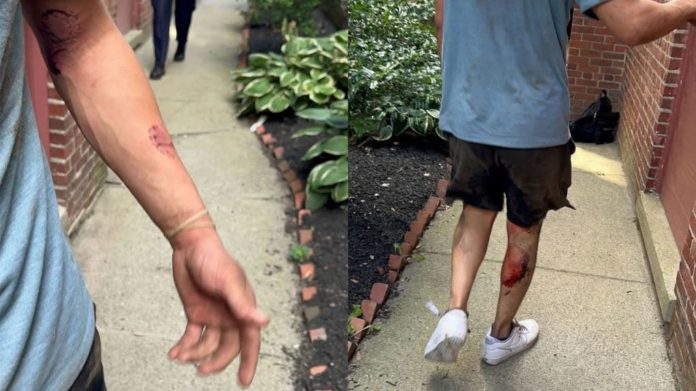 Police were called to the area of Chestnut Street for reports of a robbery around 1:15 p.m. Monday. A man tried to snatch a woman’s purse from the corner of Summer Street and Rockland Avenue just before two this afternoon. The woman fought back, sustaining several bruises.

The man who confronted the suspect says he subdued the suspect on instinct, and is still sorting through the violent events of the confrontation.

When authorities arrived at the scene, they found the suspect struggling with a delivery driver, who was allegedly bit in the arm and stabbed in the leg.

A delivery driver was bitten in the arm and stabbed in the leg while trying to stop a robbery suspect in Malden, Massachusetts. He was stabbed multiple times and received stitches in his leg after a suspect stabbed him with a folding knife.

The driver was transported to an area hospital to be treated for his serious injuries. Police were able to arrest the suspect, 26-year-old Jason Seay of Peabody, and will be arraigned at Malden District Court Tuesday.

The woman who was robbed is not seriously harmed, and the suspect is facing charges of assault with intent to murder and armed robbery.

To learn more about this shocking story, please consider the news outlets listed below to stay in the know.