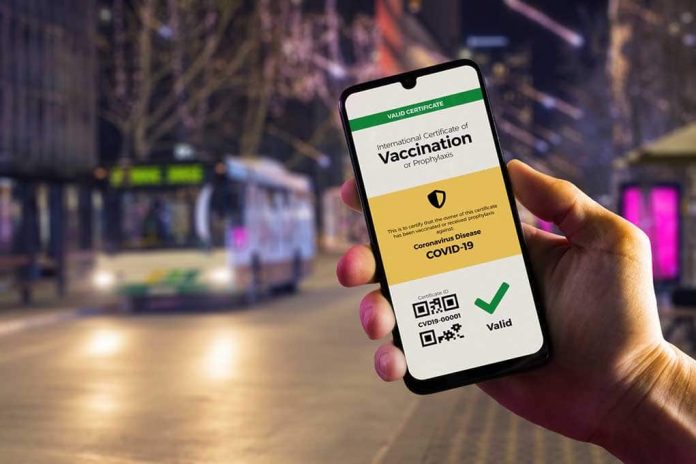 (ConservativeStar.com) – If there’s one country in the world whose citizens are very protective of their rights and freedoms, it’s the United States. As the fight continues to get Americans to take the COVID-19 vaccines that are available (according to Our World in Data 41.6% of people have been fully vaccinated as of June 2, 2021) the debate about “vaccine passports” is heating up.

When someone goes to get the shot, the provider gives them a card that tells which of the three approved manufacturers in America made the serum used and whether it’s the first or second injection (currently, the Johnson & Johnson variation requires a single dose). Since it’s issued by a certified provider, it is considered absolute proof where in the cycle a person lands. However, there are also apps being developed to do the same thing.

Senator Rick Scott (R-FL) introduced a measure in the United States Senate called the Freedom to Fly Act which would prohibit employees of the Transportation Safety Administration (TSA) from asking about a person’s vaccine status. In a statement, the senator said that “the federal government has no business requiring travelers to turn over their personal medical information to catch a flight.”

The Michigan House passed a bill that would prohibit any agency within the state from requiring proof of vaccine status to receive services from them. The 62-47 vote means that four Democrats joined the Republican majority in approving the measure as a preemptive strike against any future attempts.

Controversial Democratic Governor Gretchen Whitmer feels that it was a waste of time because there’s no legislation being proposed to require passports. Her spokesman accused the Republicans of “holding meetings with out-of-state conspiracy theorists and banning things that don’t exist.”

In Florida, the legislature sent a bill to Republican Governor Ron DeSantis that would ban the practice as it might be applied to travelers or employees, which he signed on May 3. However, the cruise line industry has a huge presence in the Sunshine State. Officials are in favor of having passengers prove their vaccine status and are expected to take this to the courts.

In Favor of Passports

The idea of proving one has been vaccinated is a popular one in New Jersey according to a recent Rutgers-Eagleton poll. The survey released on June 4 indicates that 61% of the respondents strongly/somewhat support the idea of some kind of paperwork as evidence.

New York has already taken it a step further and established what it terms the “Excelsior Pass,” a QR code that can be shown on one’s mobile device that indicates they have been vaccinated. According to the New York Times, it was first rolled out in March “as the first and only government-issued vaccine passport” and is being used by some places for admittance to concerts and bars, etc.

As noted earlier, the companies that run popular cruise ships are in favor of the idea, and airlines with their closed-in cabins are also leaning in that direction. Add to that the policies of some foreign countries requiring this kind of proof for travel and that alone makes it difficult to escape the conclusion that vaccine passports will become a part of life in some form or another.