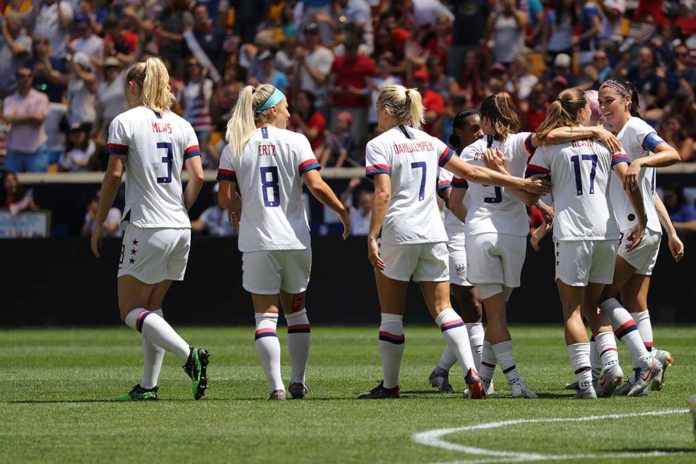 (ConservativeStar.com) – In 2022 Lia Thomas made a big splash when she began competing for the University of Pennsylvania’s ladies’ swim team. Lia is a transgender woman who began transitioning by taking hormone replacements two years ago. Recently, the question of a transgender woman competing against biological females became a hotly debated issue.

Oklahoma Governor Kevin Stitt (R) signed SB 2, the Save Women’s Sports Act into law, which prohibits people who were born male from competing on female school athletic teams. The vote in both the state’s legislative bodies was divided along party lines.

In Oklahoma, we stand with female athletes and will protect women's sports.

Thank you to all of the female athletes who joined me as I signed the Save Women's Sports Act into law today. pic.twitter.com/WfNqVr4Uy8

In his comments, the governor said that “it’s just not fair” for young females to train for years in their chosen sport only to have it stolen away from them because “the reality is: men are biologically different than women. But the outcome doesn’t mean that all Republicans agree about this.

Just recently, Republican Governors Spencer Cox (Utah) and Eric Holcomb (Indiana) vetoed similar bills in their respective states saying that there are so few examples in their state that the measures would unduly ostracize transgender athletes. Three days after the Utah bill was vetoed, the state legislature overwhelmingly overrode the governor’s decision.

The state American Civil Liberties Union (ACLU) has announced that they would be filing a lawsuit in Utah. It was not long ago that this group battled hard for the rights of women/girls under Title IX, but is now fighting to allow biological men to play women’s sports.