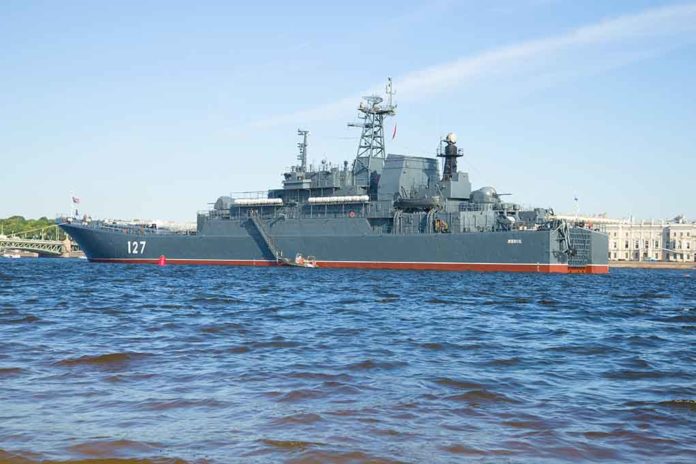 (ConservativeStar.com) – After Russian President Vladimir Putin sent his troops surging over the border with Ukraine, he increased the number of warships sailing in the Black Sea. According to the United States Naval Institute (USNI) these ships have been bombarding towns near Odesa. There has also been increased activity by Russia’s Navy around the Japanese islands, the most recent of which saw four amphibious assault ships passing through the Tsugaru Strait that separates the island of Honshu from Hokkaido.

These vessels can carry troops, tanks, and other vehicles that can then be offloaded onto land. They are believed to be headed to Ukraine, according to Japan’s Defense Ministry.

The Tsugaru Strait sighting is not the only incident that Japan has reported. According to the Japan Times, six other ships crossed the Soya Strait, which lies between Hokkaido and the Russian island of Sakhalin.

An artillery assault, like the shelling in Odesa, is a common tactic in naval warfare used to soften up defenses before attempting an amphibious landing. It appears the Russian fleet operating off the shores of Ukraine has several of the landing craft on its ships. This deployment could mean that the ones passing through the Sea of Japan are meant as reinforcements once a beachhead is secured.