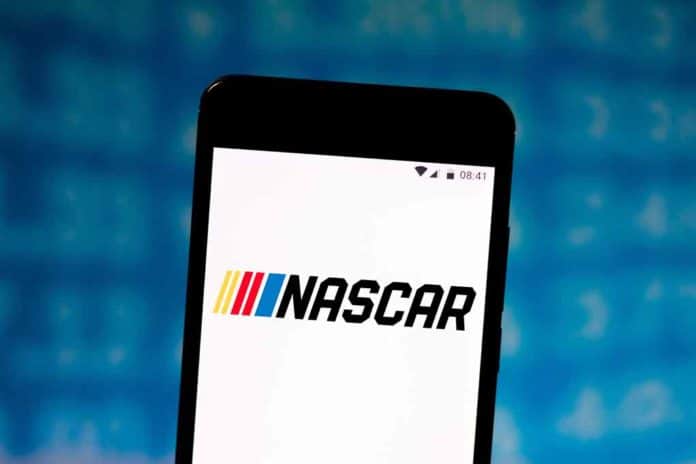 (ConservativeStar.com) – For those unfamiliar with NASCAR, it has three major brackets, the second-tier is called the XFINITY series. Drivers in all three groups tend to circle the two yearly races at Talladega Superspeedway on their calendars as two of the most coveted wins. So, when the driver of the #68 car, Brandon Brown, won the race back in October, he was naturally excited to be interviewed by Kelli Stavast of NBC Sports. Little did he know that one interview would change the political spectrum.

During the interview on October 2, 2021, all was going well until politics reared its head. Nearby fans began a chant of “F*** Joe Biden.” Acutely aware her interview was going over the airwaves, Stavast chose to announce that they were in fact yelling “Let’s Go Brandon” (LGB) as a cheer, and a movement was born.

Fielding a racing team in any NASCAR bracket is very expensive, easily moving into the six-figure range per week, so when Brown’s team was approached by a new cryptocurrency, LGB Coin, who wanted to sponsor them, they jumped at the chance. According to an article on FOXBusiness, the organization says they adhered to the protocols related to approval of sponsorships and they “received approval from a NASCAR official empowered to make those decisions….” This was backed up by alleged screenshots of email exchanges in a tweet by an attorney who claims to have knowledge of the situation.

I’m excited to welcome @LGBcoin_io aboard my No. 68 Chevrolet Camaro as our 2022 NASCAR Xfinity Series full season primary partner!

The @brandonbrown_68 went through proper @NASCAR approval process and received formal written approval. If @nascar revokes approval, we will bring suit upon them on behalf of all @LGBcoin_io HODLers who were damaged by their reliance on @nascar written approval & #cancelnascar https://t.co/Tt2dIhWhkS pic.twitter.com/3ooI4VTSMG

Unfortunately, the sanctioning body is denying any approval was ever given by an executive with that authority, and on January 5, it officially rejected the sponsorship deal. NASCAR earlier said they were unhappy with the slogan, wanting to remain apolitical — probably a good business decision, after all, there have to be Liberals/Democrats who are fans of stock-car racing. There must be at least a few, right?

What do you think, was it the right call?