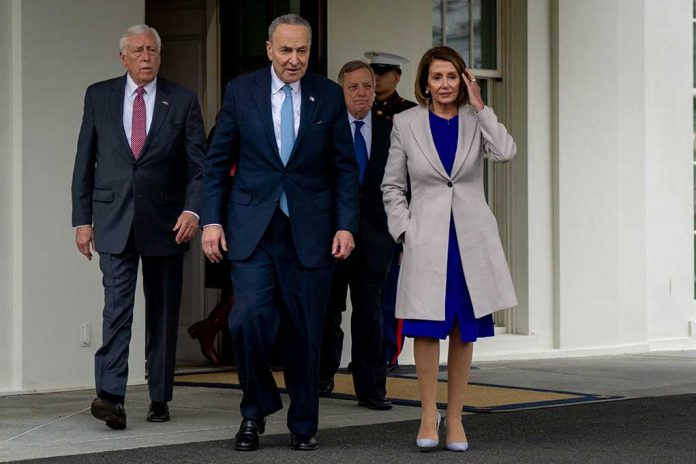 (ConservativeStar.com) – Yet again, the US is facing the prospect of a government shutdown. As the rest of the world looks on in baffled disbelief, Congress is playing political games with the vital funding bill that will keep the federal government running.

This time, it’s House Democrats who are willing to cause chaos just to get their way. The House has approved a bill that will fund the government through December, but the Democrats insisted on adding a provision that would suspend the government’s debt ceiling. That is the limit on the amount of money the Treasury can borrow to pay the debts America has already racked up. That provision dooms the bill in the Senate. Republicans have said they will not vote to raise the debt ceiling again.

With little chance of the bill getting the 60 Senate votes it needs to pass, we’re heading for another embarrassing shutdown, and federal bureaucrats are already preparing for it.

The Clock Is Ticking

If the funding bill isn’t passed by September 30 – and that doesn’t look likely – the federal government will run out of money. When a potential shutdown is seven days away, the White House’s Office of Management and Budget (OMB) activates its shutdown protocol, preparing the government for what’s about to happen. That tripwire activated on Thursday, and now OMB is “ taking every step we can to mitigate the impacts of a potential shutdown on our pandemic response, economic recovery, or other priorities,” according to White House Press Secretary Jen Psaki.

Each federal agency has to maintain a plan for how it will cope with a shutdown, and OMB will now be telling them to activate those plans – and, if necessary, make sure they’re up to date. That isn’t guaranteed. Out of the approximately 456 federal agencies, just 12 have updated their plans this year. Seven of them did so in the last month, as the risk of a shutdown mounted.

Shutdown planning covers what staff will be furloughed, who will stay at work and what essential tasks have to be completed. Even during a shutdown, some tasks have to be done by law – anything that’s necessary to protect life or property, for example. That means hundreds of thousands of federal employees need to keep working through the shutdown without pay, including 85% of the Department of Justice and almost all active-duty military. At least these workers are now protected. Former President Donald Trump passed a law that guarantees non-furloughed workers back pay.

Government shutdowns are incredibly damaging. The 35-day 2018/19 shutdown wiped $11 billion off the US economy and permanently lost $3 billion worth of economic activity. Millions of people suffered financial hardship or inconvenience. The OMB is trying to mitigate the worst effects of a shutdown if it comes, but will Congress manage to do the sensible thing and prevent one from happening? Going by its past record, probably not.