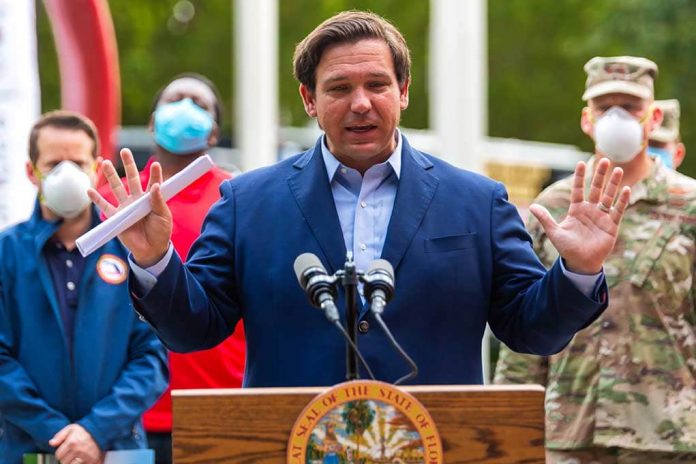 (ConservativeStar.com) – In September, President Joe Biden issued a decree demanding all employees of the federal government and its contractors, all companies with 100 or more employees, and all healthcare workers be vaccinated against COVID-19. The employees of the privately-owned companies were given the option to opt-out of the mandate if they’d undergo strict testing — federal employees have no such option. Florida’s Republican Governor Ron DeSantis has been pushing back against federal intrusion into his state and said he intends to take the administration to court.

Biden finished bottom of the barrel.. #76 out of 85 students at Syracuse Law.

One of these men just might have a bit more intellect on the law than the other? And he's suing the other😉https://t.co/xbsgFRhzQD

The governor is framing his argument as a state’s rights issue. During an event on October 14, he said his state must “do whatever we need to do to protect Floridians from mandates that could result in them losing their jobs.” He focused on essential workers like police officers, nurses, and doctors who worked themselves to exhaustion during the past year and a half battling the infection on the front lines.

DeSantis expressed his disgust with the idea that a police officer who decides to forgo the shot could lose their job. He went on to note many hospitals and medical centers are short-staffed and that across the country, professionals in the field are choosing to quit rather than take the vaccine. The pandemic has created monumental stress for nurses. So much so that the American Association of Critical-Care Nurses (AACN) says 66% are considering leaving the profession because of it.

The Fierce Healthcare website has tracked the number of people reportedly leaving systems across the nation because of Biden’s mandate. While it may seem like a trickle right now, it could be the proverbial straw that breaks the camel’s back. Amanda Bettencourt (president-elect of the AACN) said that if the overall number of people threatening to leave do so, “it would bring our healthcare system to its knees.”

Maybe a lawsuit from Ron DeSantis can help stem the tide, at least in Florida.