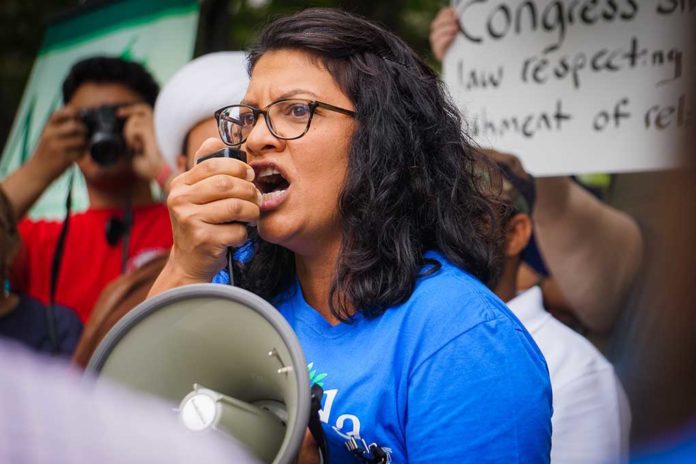 (ConservativeStar.com) – Representative Rashida Tlaib (D-MI) has made no bones about her rabid hatred for Israel. Back in November 2020, she went so far as sending a tweet (and then trying to delete it) that seemed to suggest she would like to see the Jewish State removed from the face of the earth. Now, her campaign and her Rooted in Community Leadership PAC have funneled more than $170,000 to an outfit run by Rasha Mubarak, a woman given to social media rants that are overtly anti-Semitic.

These aren’t evictions— they are forced expulsions

Say it loud. Say it clear. Palestine will be FREE🕊#SaveSheikhJarrah ✌🏽

Ms. Mubarak has labeled the Jewish nation of Israel as an “apartheid state” and one that’s in the midst of a “73 year genocide of the Palestinian people.” She’s also been a vocal advocate of the horribly flawed “defund the police” movement.

Elect a POC sheriff, they said

The two women seem to have a cozy relationship considering the fact the activist who would see both Israel and the American police dumped on the ash heap of history is the treasurer of Representative Tlaib’s PAC. The congresswoman is one of many Leftist Democrats who have been on the bandwagon against Israel and to dismantle our country’s law enforcement agencies. Others include fellow Squad members, Representatives Ayanna Pressley (D-MA) and Ilhan Omar (D-MN).

How do you feel about the congresswoman’s support of the radical activist?