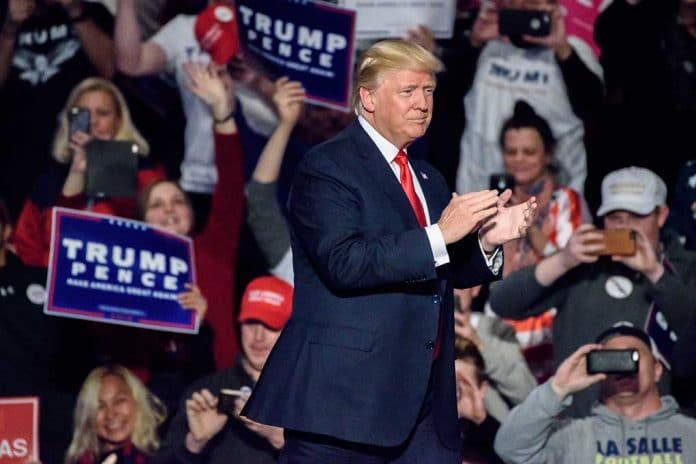 (ConservativeStar.com) – After former President Donald Trump took the oath of office in January 2017, to say that the political Left went crazy would be a bit of an understatement. After the divisive 2020 presidential campaign ended, they sunk even further into the guano. This animosity tends to make most, if not all, major elections across the country a referendum on Trump’s policies, and Virginia’s gubernatorial race between Republican Glenn Youngkin and Democrat Terry McAuliffe has been no different.

According to a poll published on October 30 by Roanoke College, the race is in a statistical tie, with McAuliffe’s numbers at 47%, Youngkin’s at 46%, and 6% undecided. That means both candidates are going to have to make heavy pushes in the last few days. Trump has announced he will be holding a virtual rally for the Republican candidate on November 1.

Virginia loves President Donald J. Trump and his MAGA movement will be delivering a major victory to Trump-endorsed businessman @GlennYoungkin.

President Trump looks forward to being back in Virginia! Details will be released when appropriate.

Another recent (October 20-26) survey, by George Mason University/The Washington Post, shows the state leans blue with 34% of “likely voters” identifying as Democrat, 33% as Independent, and only 27% as Republican. These stats could mean the non-aligned voters are likely to back Youngkin. While he has waffled in public statements about his alignment with the former president and his policies, this poll also shows that 71% of the people likely to be marking the ballots believe Youngkin and Trump are on similar tracks.

Trump is looking to garner support for Youngkin and bolster those numbers. The former president recently told Fox News, “if I endorse somebody, they win.” Will Trump’s support sway the voters? We’ll find out on Tuesday — Election Day.