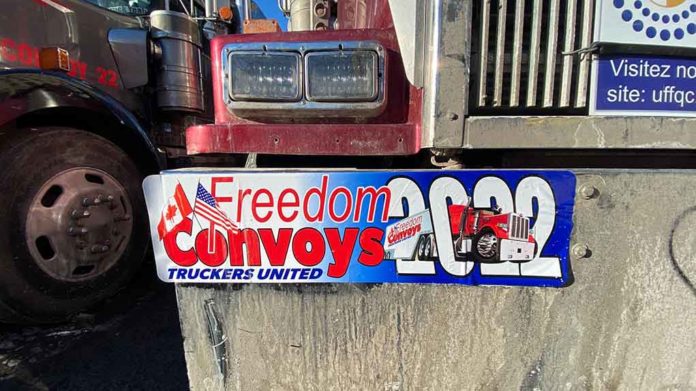 (ConservativeStar.com) – Across Canada, truck drivers have been protesting against coronavirus vaccine mandates for those who cross the border with the United States and throughout the nation. The protests, called Freedom Convoys, choked off the flow of traffic between the two countries. After a nearly week-long shutdown of the Ambassador Bridge that connects Detroit, Michigan, and Windsor, Ontario, police were given the okay to clear the trucks and restore traffic flow.

Unreal scenes in Canada as heavily armed forces move in to make arrests and tow all vehicles from ambassador bridge. pic.twitter.com/zwI6Oa2ufR

The Ambassador Bridge is the busiest crossing point between Canada and the US, but it’s not the only one that saw severe delays or closures. Because of the traffic diversion, the Blue Water Bridge from Port Huron, Michigan to Sarnia, Ontario also had massive delays, and the Pacific Highway border crossing connecting Blaine, Washington, and Surrey, British Columbia, was still shut down Valentine’s Day afternoon.

Things were more intense at the crossover point between Sweet Grass, Montana and Coutts, Alberta. Here, the Royal Canadian Mounted Police (RCMP) arrested 11 people and confiscated a stockpile of weapons and ammunition from a group allegedly prepared to use violence in support of the truckers.

The Canadian Freedom Convoy that’s been in the news has sparked a movement here in the US to do something similar in Washington, DC. While there are several different efforts underway, it appears there’s little to no coordination between them. In Israel, a convoy of hundreds of vehicles drove from Tel Aviv to Jerusalem to protest outside their Parliament Building, according to Reuters.