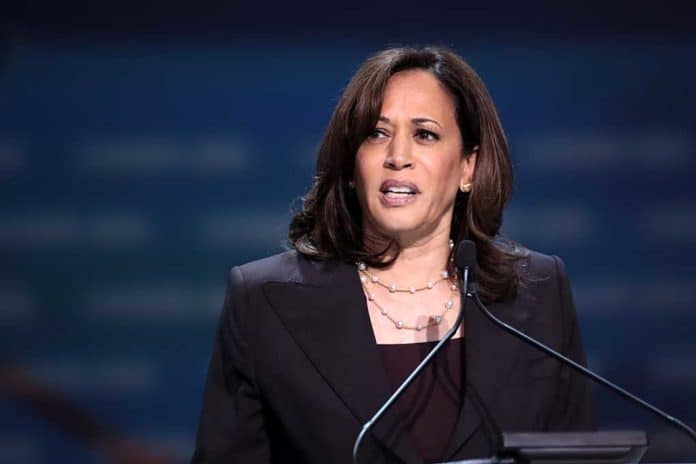 (ConservativeStar.com) – On December 1, Symone Sanders, chief spokeswoman for Vice President Kamala Harris, announced she was quitting at the end of the year. It’s the second high-profile departure from Harris’ team in only a month, and it raises serious questions about just what’s going on in the vice president’s office.

Rumors about a “toxic” and “dysfunctional” working environment in Harris’s office have been popping up in the media for months, but the White House has always denied there’s a problem. The rumors keep coming, though, with many fingers pointing at Harris’ Chief of Staff Tina Flournoy.

Flournoy, who previously worked for former President Bill Clinton, is well known for “gatekeeping” Harris – nobody gets to see the vice president without going through Flournoy first. She regularly blocks access to Harris, even for longtime political allies.

Additionally, sources have blamed Flournoy for slow, inefficient decision-making in the office because she insists all ideas go through her, creating a bottleneck. In Clinton’s post-presidential office, Flournoy had a staff of about 10 people. Now, she has over 100, but it looks like she’s clinging to management methods that don’t scale up well.

Harris hasn’t escaped criticism, though. Two administration officials, who declined to be named, claimed the problems start “at the top” and said staff “feel treated like sh*t.”

When the allegations about Flournoy started circulating, Symone Sanders was quick to jump to the chief of staff’s defense. She insisted Flournoy had “an open door policy” and was the only reason black women like Sanders could get jobs in politics. Just months later, Sanders is quitting – but isn’t saying why.

News website Axios says insiders have told it that burnout and the offer of better jobs somewhere else are driving the high staff turnover in Harris’s office. But that raises a serious question: why are Harris’ staff so much more vulnerable to those conditions than everyone else’s? Axios suggests there’s a fear of “being permanently branded a Harris person.” Is the VP’s image the real problem?

Last month Ashley Etienne, Harris’s communications director, gave notice that she’d be quitting in December. A White House source says Press Operations Director Peter Velz and Deputy Director for Public Engagement Vincent Evans will soon follow Etienne and Sanders out the door. All of them are involved in building Harris’s public image, and none of them want to do it anymore.

This week, the White House is denying yet again what Sky News Australia branded the “stench of failure” with regards to the vice president’s team. These denials are becoming less credible each time with repeated frequency.

Less than a year into the “Biden-Harris administration,” the VP is looking like a loser – and the people who’re supposed to make her look better seem to want out. Flournoy may be a terrible chief of staff, and the working environment in her office might be unpleasant, but it seems Kamala Harris herself could be the real problem.