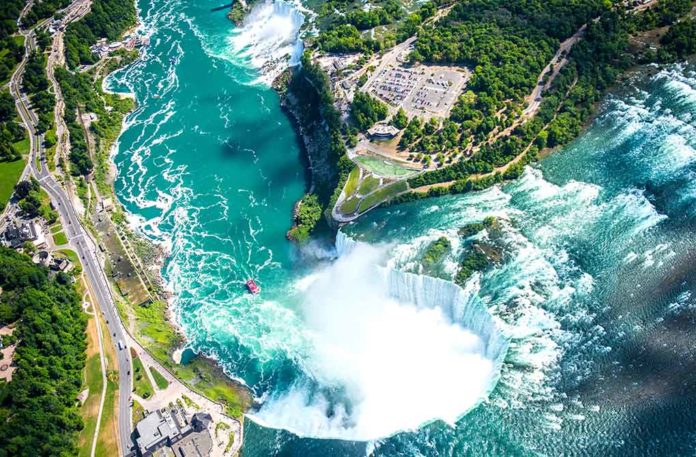 (ConservativeStar.com) – On the afternoon of Wednesday, December 8, police were called to the scene of a car partially submerged in the Niagara River just about 50 yards upstream of the brink of the American Falls in Niagara Falls State Park. The New York State Park Police sent their swift water team to recover the vehicle, but the location and conditions made it too dangerous to try. That’s when the United States Coast Guard stepped up.

The United States Coast Guard Great Lakes dispatched a helicopter from Air Station Detroit, which lowered a crew member on a hoist to pull the unresponsive driver out of the vehicle. Onlookers caught the hair-raising rescue on video.

The rescuers then handed the woman, who appeared to be in her late 60s, off to local EMS crews waiting onshore. Unfortunately, they pronounced her dead at the scene. Witnesses had reported seeing a car entering the river near a pedestrian bridge connecting the mainland and Goat Island. At the time, there was no way for authorities to determine why.

As of Thursday morning, the woman, who’s believed to be a local resident, remained unidentified, according to Park Police Captain Christopher Rola. The Buffalo News tweeted out an updated video showing that the car had moved much closer to the edge of the waterfall and now rests approximately 40 feet away.

The car involved in yesterday’s mishap has moved down stream and has rested just before the brink of #NiagaraFalls. pic.twitter.com/yBsuU8deBI

Rola also said in his email statement that it appears the car entered the water as an intentional act, at this time presumably by the driver. The manner and cause of death are still unknown, pending the results of an autopsy.