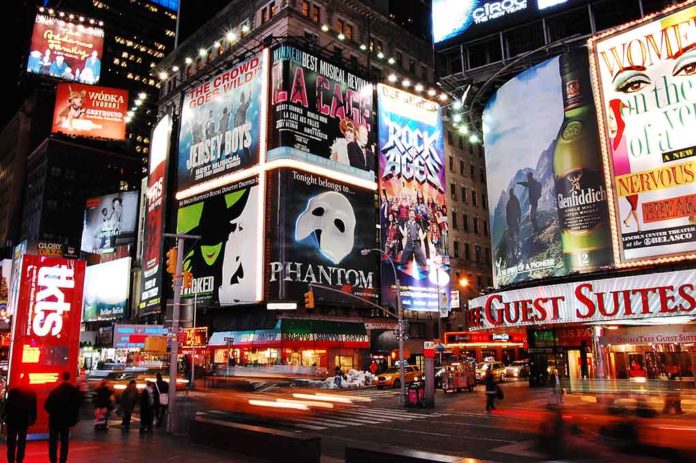 (ConservativeStar.com) – In the theater trade, people pride themselves on carrying on despite whatever life throws at them. Collapsing scenery, absent cast members or economic disaster? Never mind; the show must go on. Except now, thanks to COVID-19, it might not.

On March 12, 2020 Broadway’s world-famous theaters announced that, due to New York laws that banned large public gatherings, they would be closing for 32 days – their longest shutdown ever. In fact they had no idea what was coming. In the end, the first theater fully reopened on August 4, 2021 – almost 18 months later – and the majority stayed closed until September.

Now, theaters and show goers are realizing they’re not out of the woods yet. The emergence of the Omicron variant is cutting a brutal swath through Broadway. Just as the Christmas show season hit its stride, so did the latest wave of COVID. Now, as actors get sick, test positive or have to quarantine, a string of cancellations is closing theaters again.

So far two shows have closed permanently, and many more have been postponed or temporarily shut down. Victims of the new variant include family favorites like The Lion King, Harry Potter and the Cursed Child, and Mrs. Doubtfire.

Theaters are enforcing strict rules to protect against COVID; mask mandates are in place, and both cast and audiences need to be fully vaccinated. Unfortunately that’s not enough to prevent some actors getting infected – and, even if they don’t have any symptoms, that knocks them out of the production until they’re no longer infectious. Some shows have been able to carry on using understudies, but many have already been forced to cancel multiple performances.

The impact of Omicron is already disappointing for audiences; some shows have been canceled minutes before the curtain was due to rise. It’s potentially catastrophic for theaters and producers, though. Most Broadway shows fail anyway – it’s hard to make a profit. Just one canceled performance could be enough to tip a show from profit to loss, especially in the busy holiday season.

So far, state and city politicians haven’t made any move to close down Broadway. If they do, it could finish off many shows that are already struggling. The Broadway League, the trade association for America’s theaters, is also determined to avoid a close down as long as possible – but politics is fickle, and the government could shut them down at any time. How many shows can go on with this level of uncertainty?