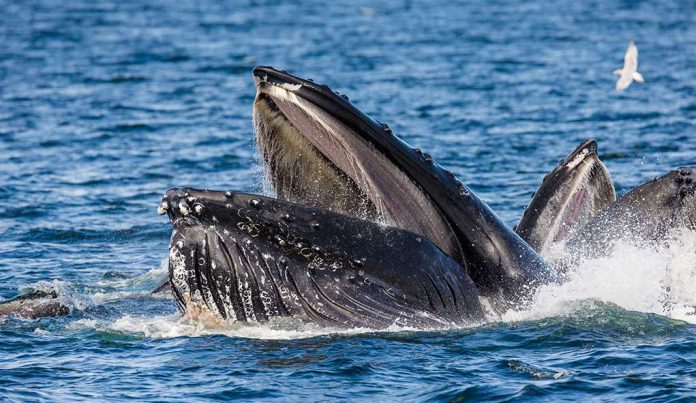 (ConservativeStar.com) – From Moby Dick to Jonah in the Bible, stories of whales have kept people enthralled for centuries. Now, one lobster diver from Cape Cod has his own story to tell — and it’s pretty incredible.

On June 11, 56-year-old Michael Packard was doing what he does most days — diving for lobster traps. However, this was no ordinary day. It ended with him in the hospital after being trapped in the mouth of a humpback whale. Packard himself gave details of the encounter on Twitter, “I was in his closed mouth for about 30 to 40 seconds before he rose to the surface and spit me out.” Amazingly, he suffered only bruising and no broken bones.

Fellow crew members witnessed the event and thought at first the whale was actually a Great White Shark, which they have encountered from time to time. Packard’s sister, Cynthia Packard, said, “He must have thought he was done.”

With good reason, shark attacks are much more common and deadly than whale attacks. In fact, whales are much more likely to be killed by humans than the other way around.

Some experts were skeptical of Packard’s whale of a tale, saying if it were true he’d have had more injuries. But members of his crew and other scuba divers in the area believe him. The diver-turned-whale-snack is highly regarded among his peers, who call him a “highliner” — meaning he’s not one to tell tall tales.

The story seemed too wild to be true: Cape Cod lobster diver Michael Packard was able to escape the mouth of a humpback whale with only bruises and a good story to tell.

Many doubted his story — but other divers and experts say they believe him. https://t.co/8bQwWeD6Pb

Charles Mayo, a whale expert at the nearby Center for Coastal Studies whose son works with Packard, called him “a smart guy and an exceptional diver.”

Packard is a walking miracle after his adventure in the mouth of a whale. As tall tales go, maybe this time it’s the whale who’s talking about the one that got away.