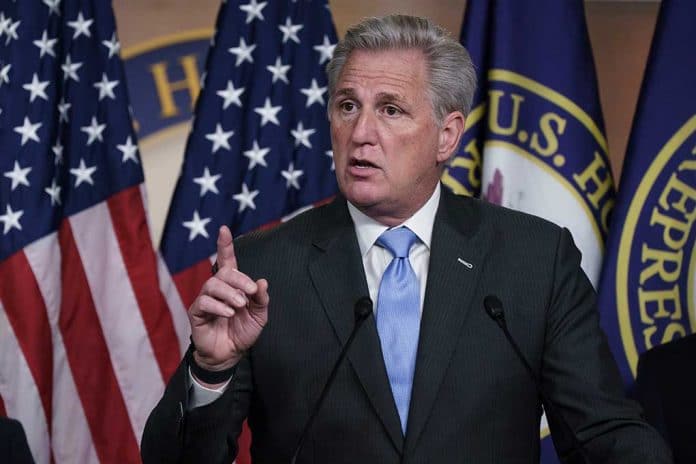 (ConservativeStar.com) – According to US law, prosecutors need a search warrant to obtain information regarding a suspect of a crime, which the Supreme Court of the United States (SCOTUS) has said includes data stored on electronic devices. This law adds weight to the concerns that House Minority Leader Kevin McCarthy (R-CA) expressed when appearing on Sunday Morning Futures on Fox News regarding the Department of Justice (DOJ) under President Joe Biden “conspiring” with tech giant Google.

McCarthy explains to host Maria Bartiromo that 90% of internet searches go through Google. Now, it’s even worse as the DOJ is using the tech giant to do its dirty work in the form of “keyword warrants.”

Most people understand, at least on some level, that their electronic devices, like phones and Fitbit watches, store reams of data on their movements. They also know their Google searches are recorded and stored somewhere in the murky mist of “The Cloud.” What few people probably realize is the administration is asking Google to provide them with the account information and IP addresses of everybody who searches for certain phrases.

Google complies with invasive "keyword warrants" that identify anyone who searched for a term. @iblametom reports: https://t.co/3lAnc00skQ

DuckDuckGo doesn't have any search histories by design and, bc of that, has had 0 search warrants (of any kind) since our founding in 2008.

An exclusive by Forbes claims the government issued a “keyword warrant” for anybody who searched the name of an underage female victim of trafficking. According to the Fourth Amendment of the Constitution, the government must provide information to the court “particularly describing the place to be searched, and the persons or things to be seized.”

This is why a judge with the US District Court for the Northern District of Illinois, in a July 2020 opinion, denied law enforcement a warrant “to cast a net” and then determine a suspect from everyone caught up in it. The courts cited several SCOTUS rulings that forbid this kind of tactic.

It’s not unreasonable to expect lawyers (including President Biden who graduated from Syracuse University College of Law in 1968) to understand the concept of precedent. The Left certainly bludgeons prospective judges/justices with it over Roe v. Wade — and the same applies to search warrants and keyword warrants. Which leads to the question: what’s up with that?